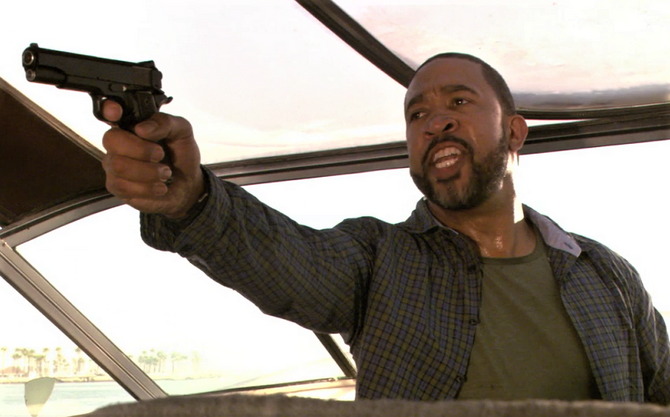 At least one
(probably more in the army)

He shot his victim three times from point blank range in under a second, with superb accuracy; also called triple tapping

His wife, fed up with his screaming and complaining about his emotional scars, finally told him that she was leaving, and he killed her in a fit of rage.

Curtis Barnes is a character in Season Two of the Showtime series DEXTER.

He is a man who served in Special Operations and ended up killing his wife due to the trauma he suffered.

Curtis Barnes draws the attention of Miami Metro Homicide when his wife, Alisha Barnes, is murdered. The neighbor reports that the couple were arguing the night before, and now the husband’s car is gone. Dexter remarks on the impressive shooting - two bullets to the chest and one to the head. James Doakes is astonished and says that Alisha was “Mozambiqued” aka ‘triple tapped,’ and that her husband must be Special Ops. He notices photos of Barnes in places like Somalia and Afghanistan. Later, Dexter reports that all three bullets were fired in less that a second.

Doakes calls a buddy in Special Ops and learns that Curtis Barnes is still in Miami. Also, it turns out that both Doakes and Barnes were in Ranger RRD (Regimental Reconnaissance Detachment). Doakes’ friend puts him in touch with a guy from Barnes’ unit who is willing to talk to him.

The next morning, Doakes is off to meet the man from Curtis’ unit at the Blue Wing Marina. To Doakes' surprise, the man he meets turns out to the murder suspect himself, Curtis Barnes. They have a tense confrontation, with them initally pulling guns on each other. After Barnes admits that he killed his wife, Doakes attempts to arrest him. However, Barnes will not surrender his gun. When he raises it again, Doakes shoots and kills him in “suicide by cop.” The killing is ruled self-defense. 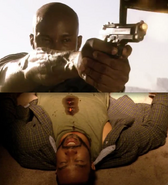