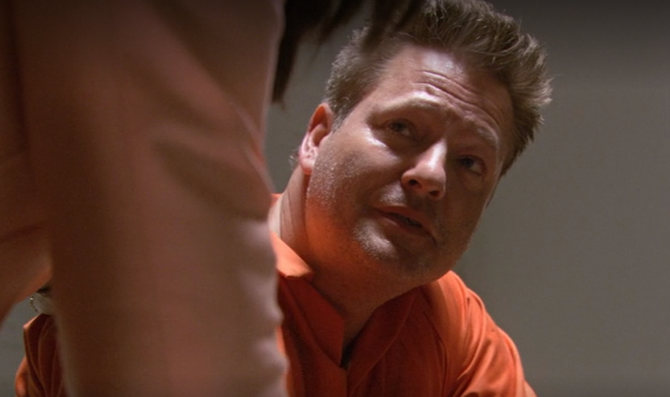 Craig Wilson is a Character in Season Two of the Showtime series DEXTER.

He is an initial suspect in the murder of his step-daughter, Betsy Court.

At an unknown point, Craig marries a woman with a teenage daughter, Betsy Court. Craig and Betsy do not get along and have constant shouting matches.

One morning, Craig and Betsy have another fight and the neighbors hear them yelling. Later, when Craig arrives home for lunch, he finds Betsy's body lying near the pool where she had been sunbathing. He tries to revive her but to no avail, and calls the police.

The police and forensics arrive at Craig's house, the scene of Betsy's murder. Craig has blood on his shirt and appears very distressed over Betsy's death, while his wife does little to defend him.

Sergeant James Doakes suspects Craig murdered Betsy due to his history of anger toward her, having blood on him, and being alone with her. His suspicion is reinforced when Blood Spatter Analyst Dexter Morgan lies to him, saying that the blood mist on Craig's shirt is from a bludgeoning. In reality, it was caused when Craig tried to save Betsy.

Doakes arrests Craig and intensely interrogates him at the station. Craig tearfully professes his innocence, but Doakes doesn't believe him. When Dexter's blood report proves that Craig is blameless, Lieutenant Maria LaGuerta interrupts the interrogation. She frees Craig and chews out Doakes. Doakes is furious, realizing that Dexter set him up, making him appear a bully and fool.

Dexter with Craig as he removes his bloody shirt

Craig with police and Doakes

LaGuerta tells Craig he can leave
Add a photo to this gallery
Retrieved from "https://dexter.fandom.com/wiki/Craig_Wilson?oldid=104244"
Community content is available under CC-BY-SA unless otherwise noted.