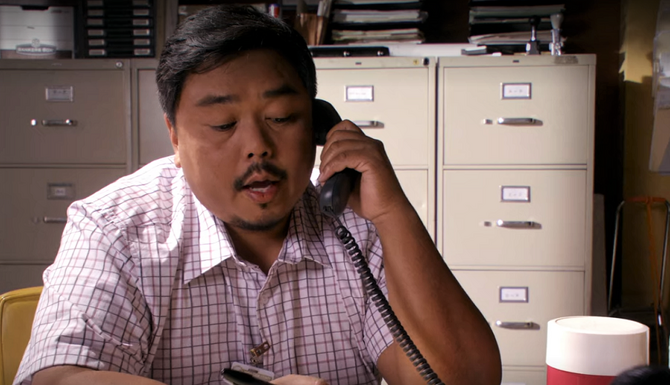 County Records Clerk is an unnamed character in Season Five of the Showtime series DEXTER.

He provided information to Dexter Morgan on River Jordan Camp after Lumen Pierce was kidnapped by Jordan Chase.

Desperate to find where Jordan took Lumen, Dexter checks the mogul's commercial real estate properties, which include a strip mall, condos, and parking garages. He doesn’t think Jordan kept his hostages in any of those places for two weeks, so he must own other properties. Dexter remembers that Jordan Chase wasn’t always “Jordan Chase.” He makes a hasty call to the Office of County Records and asks for a property records check for an Eugene Greer. The clerk asks him to spell the name and tells Dexter to check back with him the next morning. Dexter objects, saying it’s an emergency and he needs the info right away. The clerk dismissively tells Dexter, “I got a pile of shit ahead of me, and they’re all emergencies.” Dexter is adamant, “Look, this isn’t some developer who’s about to miss a filing deadline. A woman’s life is on the line. If you don’t do this, right now, she will die, and you could have done something to stop it. You understand me? This can’t wait.” The clerk finally agrees, saying he has Dexter’s number and will get back to him as soon as he has something. Dexter thanks him, hangs up, and is immediately notified of a crime scene at Bayfront Park (where Dexter had a short while ago murdered Stan Liddy)

While at the Liddy crime scene, Dexter receives a callback from the County Clerk. He says he’s got a hit on Eugene Greer. He owns one property listed as River Jordan Camp for Boys and Girls. The address is 1530 Muralia Road, and it went bankrupt about twenty years ago. Dexter realizes that Jordan took Lumen back to where it all started with Emily Birch. Dexter thanks the clerk for the info and promptly steals a car to find the camp.

Dexter receives call from clerk
Add a photo to this gallery
Retrieved from "https://dexter.fandom.com/wiki/County_Records_Clerk?oldid=107735"
Community content is available under CC-BY-SA unless otherwise noted.