Comic Book Store is a location in Season Two of the Showtime series DEXTER.

It is the scene of a murder committed by an online blogger.

Denny Foster, a night worker at the comic book store, is found lying dead on the floor with his head bashed in. He had received repeated blows as he tried to flee to the back door. Dexter Morgan investigates the crime scene, along with Sgt. James Doakes and Lt. Maria LaGuerta. Due to the the brutality and the fact that no money is missing from the register, the motive appears to be personal. Dexter shows LaGuerta the apparent murder weapon, a snow globe with traces of blood on the base.

While there, Dexter is drawn to a poster of a new superhero, The Dark Defender. According to the store owner, Denny created the superhero based on The Bay Harbor Butcher. Denny planned to set up the character as a graphic novel called Stalker of the Night, His Blade of Vengeance Turns Wrong into Right.

Dexter walks over to the poster and imagines himself in the role. "The Dark Defender," he thought, "No. Miami’s too hot for all that leather."

Later, during at a NA meeting, Dexter dozes off next to Lila West. He dreams that he is The Dark Defender, and rescues his mother from her killers.

The next day, on a boardwalk outside the comic book store, Doakes and LaGuerta discuss Denny’s case. Doakes informs her that the victim was involved in an “online geek flame war” with Benjamin Alvaro, known as Corndude. Alvaro’s truck, a 1971 Ford pickup, was seen (via a sushi restaurant’s security camera) after closing time in a nearby parking lot. Denny and Alvaro’s online rivalry evidently led to Denny being murdered.

LaGuerta advises Doakes to receive counseling, since he has shot two people in less than six months, but Doakes blows her off. However, she persuades him that they should stake-out Alvaro’s workplace together. 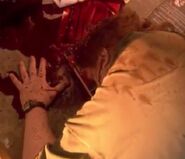 Dexter asks about the poster