In 2011, he played Travis Marshall, aka The Doomsday Killer, in the Showtime series DEXTER

His TV movies include roles in North Hollywood (2001).

He was born and raised in Sacramento, California. He attended Sacramento Country Day School, and then Chapman University, before transferring to Loyola Marymount University. He left without earning a degree.

He married former New York publicist Samantha Bryant in 2010. Together, they have two daughters.

Colin Hanks is the eldest son of double Academy Award winner Tom Hanks and his first wife, producer and actress Samantha Lewes (born Susan Jane Dillingham; 1952–2002). He has a sister, Elizabeth, and through his father's marriage to his stepmother, actress Rita Wilson, he has two younger half-brothers, Chester and Truman. 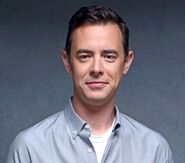