Dexter Wiki
Register
Don't have an account?
Sign In
Advertisement
in: Has Disambiguation, Alive, Characters,
and 14 more 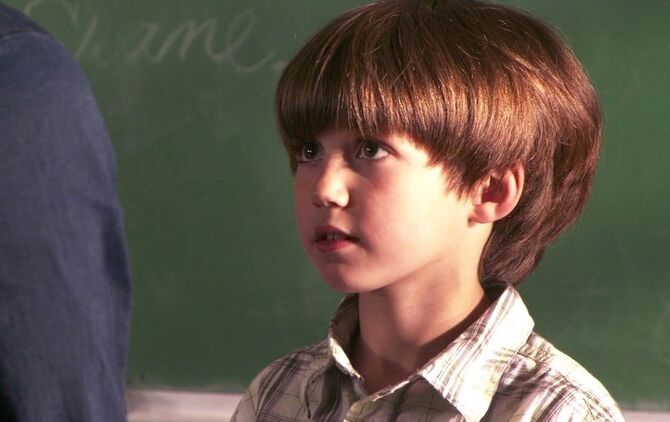 Cody Bennett is a character in the Showtime series DEXTER. He is also featured in the novels.

He is Rita and Paul's youngest child, and has an older sister, Astor, and a half-brother, Harrison. His step-father is Dexter Morgan, the main character of the series.

Cody is an average preteen boy, having a bowl haircut of sorts complimented by its brown hue. His eyes are typically wide and "alive" as well as having teeth with a slight gap. Cody tends to stand in a boyish manner, almost as if he were in trouble (possibly reflecting his father's behavior) with his arms down at this sides and his head bent slightly forward. This is in contrast to his sister who displays a strong attitude with her arms being crossed most of the time. Cody wears a variety of clothes that include casual house outfits, dress shirts for fancy occasions, swim trunks, and other things a boy of his age would wear.

Cody is representative of the pure innocence that Dexter lost as a child. While Cody's sister is often doubtful of (and sometimes appears to hate) their step-father, Cody has great admiration for him and treats him as if he were his own biological parent. Cody's strong attachment to the male members of the family extends to both Paul Bennett (whom he had full faith in for being a good father) and Dexter, who has been a part of his life from an early age.

He tends not to use foul language, acts respectful among adults, and lives the life of a normal child. However, he does have somewhat of a temper issue which is demonstrated in a fight with a young boy after he claimed that Dexter left their camp-out in the middle of the night (which Cody believed to be a lie).

The death of each of his parents doesn't cause Cody to sink into anger and depression like his sister, and he displays a more normal stage of grief. After his father's death, he is soon seen playing happily with classmates. After his mother's death, while Astor blames Dexter and wishes he would die, Cody just wants the two of them to stop fighting all the time and live as a family.

Cody is a young six-year-old boy that behaves according to his age. Even though his father used to rape and beat his mother, he doesn't remember much of it, whereas his sister does. After his father is sent to prison and Dexter begins to date his mother, Cody develops a father-son relationship with Dexter, always enjoying his company.

When his father returns from prison, Cody is ecstatic and enjoys what little time the two spend together. After his father is re-incarcerated, he blames his mother, until the latter allows him and Astor to visit Paul in prison.

When his father dies in prison, Cody begins to view Dexter as a father figure.

While Cody's grandmother, Gail Brandon, is staying with the family, she makes Cody and Astor feel uncomfortable. This is due to her very strict rules, especially when it comes to school work, leaving little room for them to play or have fun.

When Dexter and Rita split as a result of an affair he had with Lila West, Cody attempts to stay in contact with him. He calls Dexter on his cell phone and invites him to a school event. He then purposely leaves a toy in Dexter's bag so that he will return it to him.

Dexter and Rita eventually come to terms, and this doesn't sit well with Lila. She continues to pursue Dexter, which leads to her learning that Dexter is The Bay Harbor Butcher, via an imprisoned James Doakes, whom she immediately murders, in order to protect Dexter's identity.

Soon afterwards, Dexter tells Lila that he is grateful for what she did and seemingly falls for her once again. She is caught off guard and nearly killed by Dexter, but she is saved by the unintentional interference of Debra Morgan (who has no clue what is really happening). Consumed by revenge, Lila tries to murder Astor, Cody, and Dexter in her apartment, but all three manage to survive. Lila escapes to Paris where she is killed by Dexter.

Dexter continues on as Rita's boyfriend, and father figure to Astor and Cody. All the while, he lives almost all of the time at his apartment, from where he can engage in his extracurricular activities.

Cody continues growing up under the watchful eye of both his mother and Dexter. He even brings Dexter to a father-son presentation in school. When Cody is informed that Dexter and Rita are going to have a baby, he and (especially) Astor don't take it well. Dexter seems to have expected a different reaction from them.

Unlike his previous failed attempts, Dexter manages to propose to Rita in a way that deeply touches her emotions and she agrees to marry him. (She isn't aware that he had repeated the words of a stalker.) Rita begins to prepare for the wedding but, with little help from Dexter, she begins to suffer from stress. The wedding is shown at the end of the season in "Do You Take Dexter Morgan?"

Dexter and Rita are now married, have a child, Harrison, and are living in a new house. Cody often spends his free time playing with the children of the next door neighbor, Elliot Larson.

Cody joins the "Young Sailors" club per Dexter's request. During an overnight camp-out with the club, one of the children spots Dexter leaving his tent during the night (which he does, to kill Jonathan Farrow). The kid later tells Cody in school that Dexter did so because he was scared, causing a fight to erupt between the two. Cody subsequently leaves the club, and Dexter hates that Cody felt that he had to defend his lie.

Just before Thanksgiving dinner, Debra refuses to join Rita and the family, due to stress at work regarding the Trinity Case. Dexter instructs Astor and Cody to make a melancholic video, begging her to come, which works like a charm.

Later, Dexter sends the two siblings to Disney World with their grandparents, allowing him to hunt down his deadly adversary, Trinity. Sadly, while they are gone, Rita is killed by Trinity before Dexter kills the latter.

After returning home from Disney World, Dexter fills in Astor and Cody, as well as their grandparents, with the sorrowful news that Rita has been killed. They are all devastated with Astor taking it especially hard. She hates and blames Dexter for not protecting her mother (although she has no clue how right she truly is). Cody and Astor live in Dexter's apartment for a few days, along with Dexter, Debra, and Harrison, which makes the place extremely cramped. The grandparents stay in a nearby motel.

Astor insists on returning to their house, where Rita was murdered, but Dexter bluntly refuses to allow it. However, the two children skip school in order to visit the crime scene (the blood having been cleaned up). Dexter finds them staring at the bathtub. That night, Cody and Astor leave Miami for Orlando to live with their grandparents, as per Astor's wishes, even though Cody wants to stay with Dexter.

Later, Astor returns to Miami, in order to help her friend Olivia get away from her mother's abusive boyfriend, Barry Kurt. They enter the house, where they unexpectedly encounter an anxious Lumen, who has reason to believe that the intruder is affiliated with Jordan Chase. Dexter asks Astor why she is there and why she is drinking under age. The girls spend the night in the house and, the next morning, Dexter leaves for work,

Olivia's step father, Barry, tracks Olivia to Dexter's house via GPS on her cell phone. The two girls escape, leaving their cell phones behind. They are caught by the police shoplifting at the mall, but are released thanks to Debra.

Dexter then has a talk with Astor and learns of Olivia's situation, which he promises to handle. Soon afterwards, Dexter meets Barry in an alley and beats him to a pulp. He threatens much worse if Barry does not leave Olivia and her mother for good. Barry does as ordered, and Dexter drives Astor and Olivia back to Orlando. Astor, now having much more respect for Dexter, asks him to come inside her grandparents' house so that he can see Cody, who has grown about a foot taller.

Astor and Cody return to Miami from Orlando (where they reside with their grandparents) to stay the week with Dexter and Debra.

In the novels, he and Astor are portrayed as budding sociopaths, to whom Dexter provides "guidance." In the TV series, however, they are portrayed as relatively normal. Also, in the novels, instead of a half-brother he has a half-sister, Lily Anne. Cody is mostly silent, while Astor is the talkative one of the pair. Cody has a prominent Dark Passenger, but Astor's is passive. Astor likes to watch, while Cody acts, for the most part. Together, he and Astor kill a stray dog while being mentored by Dexter's brother, Brian Moser.

Dexter and Cody on the subject of geography