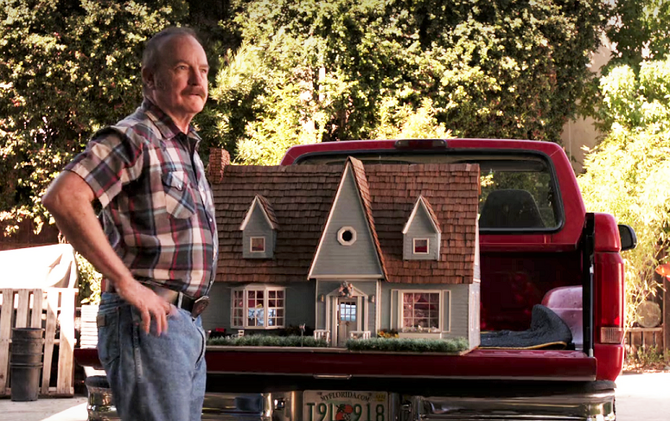 Stabbed in the chest by Dexter Morgan.

Clint McKay is a character in Season Seven of the Showtime series DEXTER.

He was the uncaring, untrustworthy father of Hannah McKay.

Clint is an older man with a thick mustache and slicked back hair (partially bald). He wears casual button down plaid shirts.

According to his daughter, Hannah, Clint was a cruel and neglectful father. At age fifteen, she ran away with Wayne Randall.

During his appearances, Clint was shown to be a liar, con man, blackmailer, and compulsive gambler. It was evident that he was a selfish and insensitive individual. If he didn’t get his way, he became enraged and used abrasive language.

When his daughter, Hannah, was six years old, Clint decided to teach her how to swim. He threw her into a pond and she began to drown. He didn't try to save her, or even let her mother help her. A nearby fisherman heard her mother's screams and came to Hannah's rescue. Since then, Hannah was always afraid of the water. (revealed in “Helter Skelter”)

When Hannah was eight years old, Clint took her to a poker tournament. He locked her in a motel room for three days while he gambled. Afterward, he gave her a dollhouse, bragged about a big win, and promised to never leave her again (which was a lie).

In later years, Clint made secret deals with crime writer, Sal Price, who paid him for information about Hannah.

One afternoon, Clint knocks at Hannah’s window while she is talking with Dexter Morgan about his urge to kill. The three of them sit at the table and Clint acts apologetic. He admits that he was an “asshole” to Hannah in the past but claims to have changed. During the conversation, Clint mentions that he was in prison for check-kiting. Clint tells Hannah that he loves her, and has a gift for her. The gift turns out to be a large dollhouse from her childhood. Hannah isn’t happy to receive it because it reminds her of the time he left her alone for days in a motel room. Clint departs in his truck and returns to The Purple Flamingo, the motel where he is staying. Hannah struggles to believe that her father has good intentions.

The next day, Hannah and her father spend time together. Afterward, they have dinner at a restaurant with Dexter. Clint is jovial and tells a funny story. Then he brings up his future plans, claiming that he is done with poker tournaments and is buying a crawfish farm in Louisiana. Hannah tells her father she is proud of him and invites him to stay at her house instead of the motel. Dexter promises to bring them donuts in the morning.

At breakfast, things go well...until Clint remarks that he needs money for his crawfish farm. Dexter immediately senses a con job and looks over at Hannah. Clint tries to persuade Hannah to invest in the farm with $20,000, but she insists that she can’t. He becomes annoyed and suggests that she re-mortgage her place. When she still refuses, Clint becomes furious and yells, “What kind of daughter won’t even help her own fucking father?” He storms out and drives off in his pickup truck. Hannah expresses guilt to Dexter for not giving her father the money. When he points out that her father hasn’t changed, Hannah doesn’t want to believe it.

Later, Clint returns to Hannah’s house, after having too many drinks. He drives his truck through her greenhouse, destroying it and all the flowers and plants. Clint runs his mouth, saying very harsh things to Hannah -- people hate her, she is an embarrassment, she plays Mother Nature with her stupid flowers, she is an ungrateful shit who won’t help her father, she is responsible for her mother’s death of a heart attack, and he should have let her drown.

Hannah begins to cry uncontrollably over her father’s coldness. Dexter, enraged by his cruelty, holds his hand tightly on Clint’s throat and orders him to leave. As Clint gets into his truck, he says they deserve each other. Hannah doesn’t understand why she keeps holding onto the hope that her father is good inside.

Clint unexpectedly shows up at Dexter's apartment. He ogles Jamie Batista, the nanny, and says Harrison is coddled because he is wearing water wings. He remarks that kids need to learn to “sink or swim.” During this, Dexter is fuming. After Jamie and Harrison leave the apartment, Clint tries to blackmail Dexter. He says that after Hannah got out of juvie, she poisoned a counselor at a halfway house and her roommate, Arlene Schram, witnessed it. Clint reveals that he was receiving payments from crime writer, Sal Price, in exchange for information about Hannah. When Sal went “belly up,” he lost his meal ticket, so he needs Hannah’s money. Dexter asks if he would really sell out his own daughter for a crawfish farm. Clint laughs about the farm and says he is up to his ears in gambling debt. If he doesn’t get the money, he will send Hannah to jail. Dexter approaches Clint, looks him in the eye, and says menacingly, “Get out of here before you see my bad side.”

Dexter asks Hannah if it’s true she poisoned the counselor. She admits to it, explaining that he was abusive, and says that Arlene is the only witness. Against Dexter’s advice, Hannah decides to give the $20,000 to her father in the hope he will leave them alone. Dexter asks Hannah why she just doesn’t take care of the problem in her usual manner (poison). She answers that she can’t kill her own father.

That night, Dexter meets Clint in a parking garage, pretending to have the money. Clint walks over to Dexter’s car and is puzzled to see rolls of plastic inside. Just then, he is knocked out with an injection of M99. Dexter takes Clint out to sea on his boat and wraps him in plastic. When Clint wakes up, he is confused and frightened. He begs for his life and promises that he won't rat out Hannah to the cops, but Dexter knows he is lying and wants to protect her.

Clint tries to convince Dexter that he doesn’t have to kill him. Dexter realizes he doesn’t have to...but he wants to...even though it doesn’t meet the Code of Harry. When Clint tells him, “You’ve got the Devil inside you, boy,” Dexter smiles, and says, “No. I think it’s just me.” He then stabs Clint in the heart and drops his body overboard. As Clint sinks below the waves, Dexter mockingly says, “Sink or swim, daddy.”

Dexter doesn’t tell Hannah outright that he killed her father. Instead, he promises that he won’t ever bother her again. Since Hannah is aware that Dexter is a serial killer, she likely understands what that means. Her eyes tear up and she thanks him. She then tells Dexter she loves him. After a moment, he replies, “I think I love you, too.”

Neither Dexter or Hannah know that Clint already provided Arlene Schram’s name to the police.

Clint shows up at Dexter's apt.

Clint is injected with M99

Clint wrapped in plastic on Slice of Life

Clint begs for his life

Sink or Swim
Community content is available under CC-BY-SA unless otherwise noted.
Advertisement