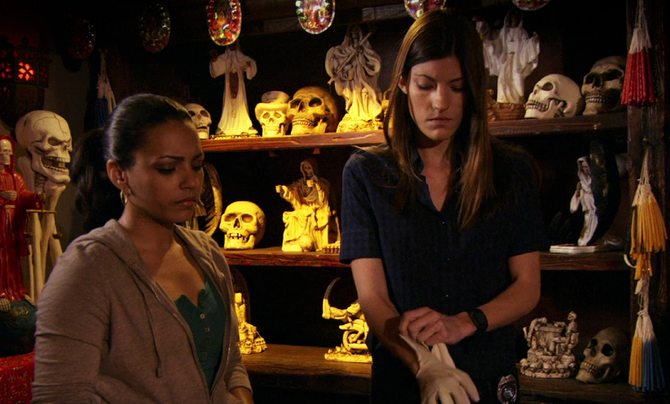 She is a police officer in the Miami Metro Police Department, who assists during the Santa Muerte Case.

Cira is a short, beautiful Latina, with long, curly black hair that is usually tied back or pulled up into a bun.

When first introduced, she is wearing a police uniform (black shirt and black pants), and a silver badge. Later, Cira mostly wears a variety of casual clothes.

Cira’s interest in the case stems from having grown up in the neighborhood of the Santa Muerte murders. She readily shares her knowledge of local activities, while most others in the community fear talking to the police.

While on duty, she is attentive to details and often insightful. Her goal is to achieve the rank of Detective.

Nina Alfaro's head is found in a park, with her eyes and tongue cut out. Detective Debra Morgan is on scene, taking notes. Officer Cira Manzon remarks that it looks like Santa Muerte, the cult. She states that the candles signify money, and the missing eyes and tongue are a message: "You didn't see anything. You're not going to say anything." Cira also tells Debra that if it is a Santa Muerte killer, he used a machete. Debra is somewhat skeptical, as she thinks the victim was murdered by a drug cartel. Later, Vince Masuka proves during testing that the head was indeed cut off by a machete.

Francisco Alfaro, the husband of Nina, is next found dead. At his crime scene, Debra admits to Cira that she was right about the machete, and asks for her input on the current matter.

Footage is found of Mr. Alfaro acting strangely while withdrawing money from an ATM. At this point, the team speculate that Nina and Francisco’s deaths were a murder-suicide.

Debra requests Cira's help to interview the owner of a local store, La Botanica -- Fauzi Goberi. Cira says that Fauzi knows everybody in the neighborhood. At La Botanica, they are greeted by an elderly clerk, while Debra notes the Jesus and Mary statues for sale.

In Spanish, Cira requests to see Fauzi. The clerk reluctantly takes them into the back room, where an abundance of Santeria merchandise is on display. Fauzi views Debra as an outsider and offers little help. He even initially pretends that he can’t speak English. Outside the store, Debra asks Cira to return alone the next day to try again. When she does, Fauzi opens up and gives Cira a description of two likely suspects.

After Debra and Cira view bank security footage again, Debra suggests that Nina may have been held hostage for ransom. Francisco’s behavior can be explained if he didn’t know the password to the ATM.

When they return to La Botantica to talk to Fauzi, it looks empty. However, they find him - dead and decapitated - in the back room. Cira blames herself because he was killed after he talked to her.

Cira is present at the Fauzi crime scene, but is only seen as an observer. Later, at the station, both Debra and Cira present the evidence -- a partial thumbprint on a cigar butt.

Debra’s team conducts a raid at the Fuentes Brothers' apartment building. Cira helps out by showing their photos to residents, and speaking in Spanish. When Jandro Mendoza’s neck is slashed by Carlos Fuentes, Cira offers support and tries to console Debra.

Because Joey Quinn is on suspension, Cira works part time as Debra's partner. Cira displays a calmer personality, and is more positive and less foul mouthed than Debra.

Cira soon finds additional footage from banks that show at least eight more people freaking out while drawing money from ATMs. The next morning, Debra and Cira drive around to check out the names. At one house, they discover the earliest kills by the Fuentes Brothers, which have become mummified and infested with maggots. Thus far, Cira has been unruffled by grisly crime scenes, but this is too much for her and she vomits outside the house. (Before they kick in the door, Debra reminds Cira that she is the Detective and more experienced.)

With Cira standing by in uniform, Debra presents her plan for apprehending the Fuentes Brothers to the team. Thomas Matthews thinks that it is a waste of time and money, and does not believe the brothers will ever return to Club Mayan. Despite this, the team and Cira go ahead with several undercover opts inside the club, but the brothers never show.

One night, while watching the opt from a van, Angel Batista notices a young woman wearing a Santa Muerte necklace. He enters the club, flirts with her, and learns that her name is Yasmin Aragon. He brings Yasmin back to Maria LaGuerta's office where a plan is devised in which Yasmin will help get the Fuentes Brothers into the club if they drop her drug charges.

The new undercover operation is set to take place at Club Mayan. Yasmin enters the club and spots the Fuentes Brothers. She is directed to sit with Marco Fuentes and they engage in an apparently friendly conversation.

Cira feels that she and Quinn are standing out. To appear less obvious, Cira walks over to the bar for a drink. Suddenly, Carlos Fuentes notices Cira from afar and motions for her to come over to him. Debra, listening from the van, rejects this move because it's dangerous but Maria LaGuerta, acting supervisor, gives the go-ahead.

Cira approaches Carlos, speaking Spanish, and they sit together next to Yasmin and Marco. For a few minutes, all goes well, but then Carlos forces his hand up Cira's skirt and discovers her hidden handgun. Carlos warns his brother, who accidentally shoots and kills Yasmin. Carlos knocks Cira to the floor and tries to escape. However, while Carlos is holding a hostage, he is shot in the head by Debra. (Because she killed Carlos, Debra is forced to attend six therapy sessions.)

Cira blames herself for the screw-up in Club Mayan, but Debra reassures her that she was following orders. LaGuerta, on the the other hand, does want Cira to take the fall since she is a young officer just starting out. Debra attempts to convince LaGuerta that it’s wrong and the team should stick together. LaGuerta ends up pinning the whole scenario on Debra, despite the fact that LaGuerta herself gave the orders against Debra’s advice. Debra is placed on suspension with pay, and assigned to work in the file room with Francis.

Debra notices Cira carrying a box into Homicide and asks if she’s moving in. Cira informs her that LaGuerta told her to move some of her stuff into the department. Debra realizes that Cira had backed LaGuerta’s story about the Club Mayan shooting. When she confronts her, Cira states that she admires Debra a lot, and wants to learn from her. Debra rebukes her, saying that what she did, she would never learn from her. She wishes Cira luck in achieving her goal of becoming Detective.

Cira enters the break room as Debra leaves it, Within earshot of Cira, Debra says sarcastically, “Anybody needs a real fucking detective, I’ll be in the file room.” Cira looks embarrassed and keeps walking. She does not appear again.