Start a Wiki
watch 00:51
Who is Christine Hill?
Do you like this video? 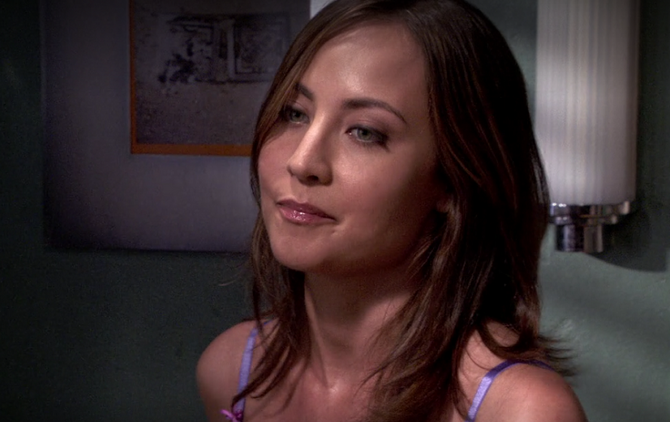 She was a reporter who met Joey Quinn while covering the Vacation Murderers. Her biological father is Arthur Mitchell aka The Trinity Killer.

Christine is slim, on the short side, with a heart-shaped face and long brown hair.

She is typically seen in business dress becoming of a journalist and columnist.

Christine has a strong loyalty to her father, and will do anything to be acknowledged and loved by him. She even went to great lengths by shooting Special Agent Frank Lundy and Debra Morgan (killing him and wounding her) to obscure her father as The Trinity Killer

Deep down, she's very lonely, wanting someone by her side who shows he cares about her. She originally manipulates Joey Quinn with her charm to find out the progress on the Vacation Murders Case. However, later on, she grows to care about him and they spend a lot of time together, with her even cooking Thanksgiving dinner for him. Although Quinn enjoys the sexual aspect of their relationship, he balks when she wants him to think of her as his "girlfriend."

When police begin to suspect her for Lundy's murder, Christine reaches out to her father for help. However, he rejects her and tells her that he wishes she was never born.

The emptiness of of her life overwhelms her -- her father does not accept her as his daughter, Quinn is furious at her betrayal, and Debra will not forgive her for killing Lundy). In despair, Christine commits suicide, ending her loneliness and complicity in her father's crimes.

Although her parents were not married, Christine maintained ties with her dad.

At the age of five, Christine witnessed her father committing one of his 'bathtub' ritual murders. Mitchell convinced her that it was a bad dream, but as an adult, she came to realize it was real while covering the Trinity Case.

Throughout her life, she was faithfully devoted to her father, even though he was generally cold towards her, only seeing her a couple of times a year and keeping her existence a secret from his family. Postcards found in her apartment implied that Mitchell did occasionally express his love for her.

Christine meets Joey Quinn at the scene of Lisa Bell's murder and they soon begin to date. She is able to seduce classified police information out of him regarding the Vacation Murderers, Her relationship with Quinn causes tension with his colleagues, but Angel uses her hovering at crime scenes to their advantage when he leaks that one of the murder suspects has an STD. Christine publishes the info which causes a rift between the two murderers, leading one to shoot the other and quickly be caught.

Meanwhile, Frank Lundy returns to Miami to resume his hunt for The Trinity Killer. To protect her father, Christine shoots and kills Lundy, but only wounds Debra. The shooting is initially blamed on the Vacation Murderers.

After seeing her byline on several stories about the Trinity Case, Mitchell pays Christine a visit. Later, in a panic, she convinces her father to meet with her again. This time she confesses to him that she knows he is The Trinity Killer, but still loves him and shot Lundy to protect him. Mitchell is furious with her despite her support and decides to sever ties with her.

Debra distrusts Christine because of her job as a reporter, but becomes more suspicious when Christine, while attempting to commiserate with Debra over Lundy's death, acknowledges a detail of the crime that was never reported. The police discover the biological connection between Christine and Trinity. They arrest her but she admits to nothing, and claims she never knew her father. She is released, with police hoping she will lead them to Trinity.

When Christine tries to contact her father again, he says he wants nothing to do with her. Emotionally devastated by the abandonment of her father after what she did to protect him, Christine confesses to Debra that she shot Lundy and apologizes. She begs Debra for forgiveness, but when Debra says she cannot forgive her, Christine quickly reveals a gun hidden under her seat and kills herself. Later, when Dexter tells Mitchell that Christine killed herself, he seems initially upset, but then says she was "weak."

Angel questions Christine about postcards from her father

Christine asks her father to help her 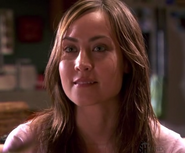 Christine's card
Add a photo to this gallery
Retrieved from "https://dexter.fandom.com/wiki/Christine_Hill?oldid=109440"
Community content is available under CC-BY-SA unless otherwise noted.