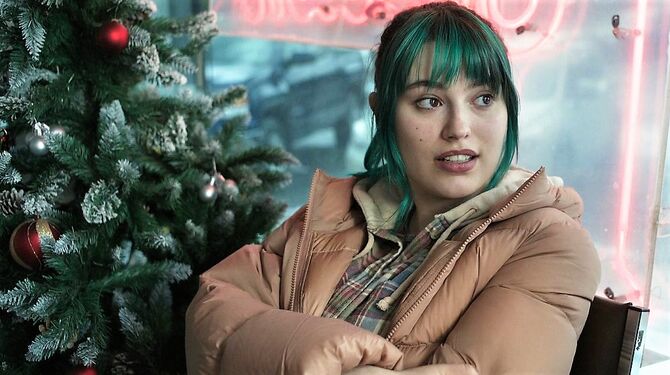 H is for Hero

Too Many Tuna Sandwiches (Corpse)

Shot in the eye with a rifle by Kurt Caldwell

None
Chloe is a character in the Showtime special event series Dexter: New Blood.

She asks Kurt Caldwell for money for bus fare after she spends what he already gave her.

As Dexter is pumping gas, he sees Kurt Caldwell talking to a young woman {Chloe) inside the diner.

A couple days later, Susan, a waitress, informs Kurt that customers are mentioning the green-haired girl hanging out in his diner. She offers to take care of it, but he says that he will.

Kurt approaches the girl and calls her Chloe. She says defensively, "Look, I - I know I said I was gonna use that money you gave me to get bus fare to my mom's, but I, I was really hungry and - and I needed to buy a new coat, 'cause it's cold as hell out there, and I just...." Kurt tells her that it's okay, She then pleads for more money, "If you spot me another $80, I will get that bus fare. I swear, just - just give me your address, and I'll... and I'll send it back to you as soon as I get to my mom's." Kurt says he can't keep giving her money, but he will give her a job at the diner making her own money. Chloe sighs and says she's not staying and just needs bus fare. Again, she asks Kurt to help her with that.

Afterward, Kurt drives Chloe to a cabin out in the woods, the same one Lily stayed in.

Kurt lets Chloe into his spare room telling her to stay as long as she likes, “meals included”. She is shocked by his kindness and is so grateful to have a place to stay. She asks what he wants from her. He just says he asks humbly that she pay it forward.

Later on, Chloe can't open the door. She bangs on the door and screams “sir!” She hears footsteps above and then sees the camera where the words “You’re already dead” are written.

Chloe stares at the camera and takes her top off as Kurt watches. Over a loudspeaker, he tells her “Stop it, this is not what this is about”. Frustrated, he slams the computer closed. She pulls out a mirror shard from under her pillow after the camera shuts off.

Kurt opens the door for Chloe telling her she’s free to go - “it’s over”. She says “make me” and grabs the mirror shard. Kurt walks in and she slices his face. He grabs her and drags her outside. He tells her to run but she hesitates. She runs towards him and he shoots her eye. He screams “you ruined everything” before shooting her again.

Kurt attempts to reconstruct Chloe's face where he shot her, but is unable to restore her eye. He ends up punching her corpse, screaming "fucking waste".

Kurt brings Chloe to the cabin