In 2013, she played Dr. Evelyn Vogel, a neuropsychiatrist and the mother of a psychopath, in the Showtime series DEXTER.

An icon of the Swinging Sixties, she began her career as a model and later became a fashion icon and muse. Because she speaks French fluently, she often stars in French films.

A four-time César Award nominee, she received an Honorary César in 2001 and France's Legion of Honour in 2002. She was made an OBE in 2000 for her services to the arts, and received the 2015 Lifetime Achievement Award from the European Film Awards..

Rampling was born in Sturmer, Essex. She grew up and spent most of her childhood in Gibraltar, France, and Spain, before she returned to the UK in 1964. She attended Académie Jeanne d'Arc in Versailles and St. Hilda's School, a boarding school in Bushey, Hertfordshire, England. She had one sister, Sarah, who committed suicide in 1966.

In 1972, Rampling married New Zealand actor and publicist Bryan Southcombe and had a son, Barnaby, who became a television director as an adult, before divorcing in 1976. The couple was widely reported to have been living in a ménage à trois with a male model, Randall Laurence, and in 1974, Rampling was quoted by the syndicated columnist Earl Wilson as saying, "There are so many misunderstandings in life. I once caused a scandal by saying I lived with two men ... I didn't mean it in a sexual sense ... We were just like any people sharing a flat."

In 1978, Rampling married French composer Jean-Michel Jarre and had a second son, David Jarre, who became a musician and singer. She raised her stepdaughter Émilie Jarre, who grew up to become a fashion designer. The marriage was dissolved in 1997, when Rampling learned from tabloid newspaper stories about Jarre's affairs with other women and had a nervous breakdown. She was engaged to Jean-Noël Tassez, a French journalist and businessman, from 1998 until his death in 2015.

She has a house in Paris and another in Chelsea. 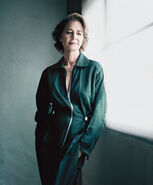 Add a photo to this gallery
Retrieved from "https://dexter.fandom.com/wiki/Charlotte_Rampling?oldid=107397"
Community content is available under CC-BY-SA unless otherwise noted.