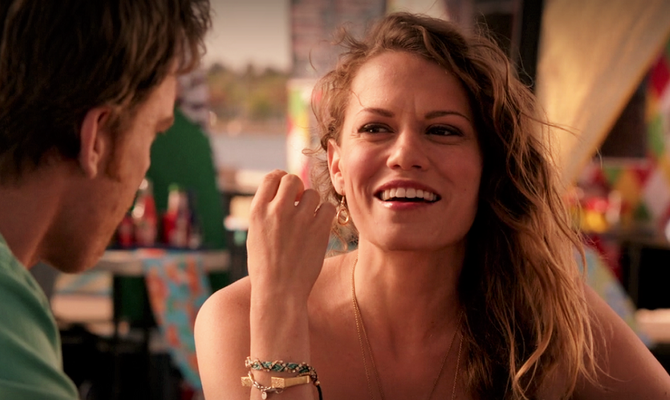 Are We There Yet? (corpse)

Bludgeoned with a swan statuette by Oliver Saxon

Cassie Jollenston[1] is a character in Season Eight of the Showtime series DEXTER.

She a friend of Jamie Batista, and neighbor of Dexter Morgan.

After a lunch date with Dexter Morgan at the food truck she owns, he doesn't call her, so she begins seeing a new man, Oliver Saxon. Unfortunately, she ends up the victim of a merciless bludgeoning in her apartment. Quinn initially suspects Zach Hamilton but it is later revealed that Saxon murdered Cassie and framed Zach for the crime.

Cassie is an attractive, Caucasian female in her 30s with curly brown hair and brown eyes. She has a slim, fit build and tends to wear colorful, fashionable clothes.

Cassie's shown to be an intelligent, friendly woman. She is good friends with Jamie Batista, the nanny for Harrison.

She is drawn to Dexter Morgan, admitting that "unavailable, mysterious guys" are the most appealing to her. When she first meets him, she casually flirts with him, and their subsequent meetings show her attempts to make a connection. In one situation, when Dexter has to leave while they are a double date, she shows full understanding and creates an excuse to help both of them end the evening on a good note. Soon, she begins to think that Dexter is not interested in her, and starts dating another man. Even so, Cassie is still attracted to Dexter, but feels that she blew her chances at getting together with him.

Cassie moves into apartment 8B next to Dexter One evening, after investigating A.J. Yates, Dexter arrives home to find an unknown woman standing in his kitchen. She introduces herself as Cassie, a friend of Jamie. Cassie says she is out of laundry detergent, and was hoping to borrow some. Casually flirting with Dexter, she shows signs of attraction before Jamie walks in seeing that the two have met. Both women soon leave, with Cassie bidding farewell to both Dexter and Harrison. After they close the door, Harrison says, "She's nice."

A couple nights later, when Dexter returns home, he finds not just Cassie and Jamie but Joey Quinn as well in his apartment. After greeting Cassie again, he asks to talk to Jamie in the other room real quick and when they're alone he wonders what they're doing in his apartment. She reveals that earlier that day they agreed to dinner plans with Cassie (as she's trying to set the two of them up in a relationship) and Dexter remembers that he agreed while trying to deal with his son's insisting desire to watch cartoons, possibly not realizing he had done so. Jamie brought Quinn over to make it a "double date" so it would feel less awkward for the two of them, though Dexter tries to get out of the night since he has more pressing engagements (saving a kidnapped Evelyn Vogel for starters). Jamie "bests" him by threatening to leave for the night, meaning Dexter would have to watch Harrison all night instead of him being able to go out like he needs to so he reluctantly agrees to the date.

As he sits in on the date, he constantly receives updates from his sister Debra Morgan on their search for Vogel. He makes an excuse to go to the kitchen, calling Deb and then saying he'd be on his way in five minutes. He sees opportunity in talking with Cassie here, so he urges her to come into the kitchen where he can speak to her alone. He apologizes for the evening, saying it's embarrassing but he has to head out to "work". She understands completely, saying that when she was in finance it was a 24 hour job for her as well and agrees to lie for him so he doesn't "piss off the nanny". Both make excuses for them to have to leave, while she apologizes to Jamie for the night and Dexter heads out...but not before the two agree on scheduling a date together in the future.

The two eventually meet together, though the encounter is relatively awkward conversation. She asks him about his hobbies and life, while Dexter gives plain and relatively boring answers while trying to hide who he really is. He remains polite regardless but Cassie takes this encounter as her fault, feeling she messed up the date.

During Jamie's birthday party, she's seen flirting with a man while Jamie urges Dexter to "take a shot" now otherwise she'll be off with that guy. He does walk over to Cassie later on, starting another awkward conversation before the man, Oliver Saxon, walks over and Cassie introduces the two. After some short talk, Dexter says he'll go check on Harrison before bidding the two farewell.

It's revealed that Saxon and Cassie started seeing each other, as they're both seen exiting her apartment going for a late night swim (according to Saxon), who looks at Dexter and Zach Hamilton who were meeting outside his apartment. Zach spots Cassie, stating that "she's cute" while Dexter agrees instead moving onto the fact that he's teaching Zach the code. Zach happens to be a young psychopath who already killed a woman by viciously beating her and has extreme urges to kill again, while Dexter is attempting to teach him the Code of Harry and control these urges.

Later on, Cassie runs into Debra as she's placing a tracker under her brother's car (as she's suspicious of whether or not he's seeing a woman named Hannah McKay, Dexter's recent ex-girlfriend) and asks what she's up to. Debra plays it off that she forgot her sunglasses in her brother's car, introducing herself as Dexter's sister. It's here that Cassie reveals she's still into Dexter, if not more so due to their date though she admits that she feels she's the one that messed it up. Deb hints that Cassie should try not to get involved with Dexter, she seems like a nice girl (and normal enough) and Dexter's not a mystery she wants to solve.

A little time passes, with Cassie returning home while Dexter's out trying to track Hannah. Zach arrives at Dexter's apartment, rapidly using the knocker to tap on the door repeatedly. He starts yelling for Dexter, which combined with the insane amount of knocking, alerts Cassie and she pokes her head out the door to see what's going on. After she says "It looks like he's not home", Zach turns a cruel gaze her direction before storming passed her. She asks if she can give a message to him with his reply simply being "yeah fuck him". After this meeting, she looks on in confusion about the incident and somewhat disgust in Zach's attitude, before walking inside.

Dexter is notified of a crime scene at his apartment complex, where he arrives to find Cassie beaten and bloodied on the floor, dead from her injuries. Her face has sustained several wounds (including a swollen eye), with bruising around her neck...similar to the victim Norma Rivera, who Zach had previously killed. Saxon shows up, asking for Dexter in particular as he's kept from entering the apartment by patrols. Inquiring on what happened, while appearing visually emotional of the situation, Dexter informs him that he's uncertain himself and will try to figure it out, while Saxon moves out to the railing (apparently in tears).

Zach's blood is found at the crime scene, which Dexter hides from the police department, since Zach knows too much about him (and so that he can take care of Zach himself). However, he comes to discover that Zach was framed by The Brain Surgeon, who later kills Zach.

Cassie found dead in her apartment.