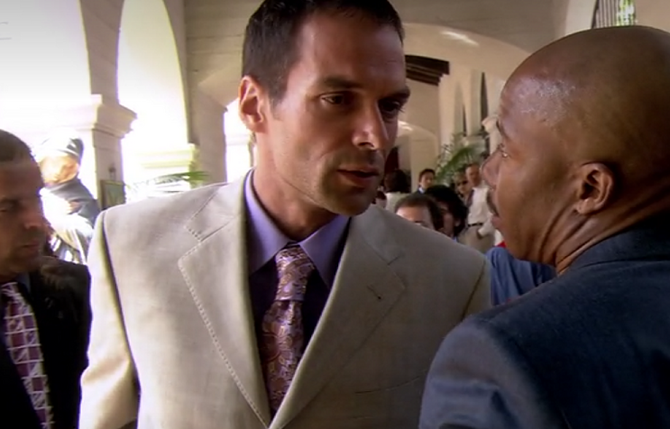 Arrested when he attempted
to kill Sgt. James Doakes

His organization and access to assassins, such as Norberto Cervantes

He usually pays someone to commit the murders for him but will get his hands dirty if the threat is personal.

He lives in a dangerous world
consisting of drugs and killers

Carlos Guerrero is a character in Season One of the Showtime series DEXTER.

He is a drug lord and the head of a cartel operating in Miami.

After he orders the death of undercover officer, Ricky Simmons, and his wife, Kara, Guerrero serves as an antagonist for Sergeant James Doakes.

Guerrero is a tall, slender man with short black hair and pronounced cheekbones. He appears to be of Latin American descent, having dark-toned skin. There is slight facial hair above his lip and around his chin. His outfits consist of long-sleeved designer shirts, expensive pants, and dress shoes.

Carlos Guerrero is a man who takes pride in circumventing the law. He ensures that his crimes cannot be traced back to him. When one of his henchmen is arrested, he's quick to have another assassin kill him to keep him from talking,

He acts like the drug kingpin he is, on top of the world with men following his orders. He's arrogant, and thinks that he's above the law. He cares nothing for his subordinates, but takes it as an insult if one of his men is attacked. He demands respect and becomes angry if confronted in public. However, like some drug lords, he does place his loyalty in family and, especially, his daughter of whom he is very protective.

Anyone that's a problem is eliminated but, typically, Guerrero keeps his own hands clean. However, when his men kidnap Doakes after an assault staged by Detective McNamara, he throws in a punch or two before he tries to execute him.

The homicide team investigates when a man apparently jumped off a westbound causeway, one of two bridges. It's determined that it was not suicide, but foul play. Back at the station, the team learns that the victim is Ricky Simmons, a cop. Sad and angry, they are determined to find his killer.

Lieutenant Maria LaGuerta and Sergeant James Doakes head to his Ricky's house to inform his wife, Kara, of Ricky's death. When they arrive, Kara doesn't answer the door. Doakes looks in the window to sees her lying on the floor, covered in blood. Thomas Matthews, who is on scene, reveals that Ricky was working undercover for ten months in Carlo's Guerrero's crime family. Kara's phone is found under her sofa with a recording of her pleading for her life before she was shot.

A DNA match reveals that Ricky was assassinated by Norberto Cervantes, one of Guerrero's many henchmen. When Carlos meets with Norberto in a park to give him the payment for both murders, the cops show up and arrest Norberto. Evidence is then found to also comment Norberto to Kara's murder.

Afraid that Norberto will turn state's evidence against him, Guerrero sends an assassin to kill Norberto. Since the hitman was dressed in a police uniform and had a key to Norberto's jail cell, he may have been an officer on Guerreros payroll.

Kara later dies in the hospital.from heart failure. This strongly affects Doakes, as he was in a secret relationship with Kara.

Dexter recalls the anguish of Harry Morgan when he lost his partner, Davey Sanchez, and considers going after Guerrero on impulse for killing an officer. However, he decides against it as it's not a world that he needs to be involved in.

When Guerrero holds a confirmation celebration in church for his daughter, Rose, Doakes crashes the party and tells Rose that her father killed two people. Guerrero is furious at Doakes but pretends to brush it off. They warn one another that each crossed a line.

One of Guerrero's high ranking lieutenants is assaulted in his home by Detective McNamara and two other officers disguised in clown masks. When Guerrero discovers that someone broke the knees of his best earner, he immediately suspects Doakes.

Due to his previous affair with Kara, a cop's wife, Doakes finds himself in a heap of trouble from Kara's brother, Detective McNamara.

Guerrero's men continue to follow Doakes around to intimidate him. When it becomes clear that Doakes isn't scared, two of Guerrero's men kidnap Doakes so that Guerrero can personally kill him. Little does he know, that it was Detective McNamara who broke the knees of his earner and has set it up to finally get him. When Guerrero raises his gun to kill Doakes, McNamara and his partners shoot Guerrero and his henchmen, and arrest him for attempted murder.

Guerrero buys a lobster from a vendor

Dexter and Guerrero in a restroom