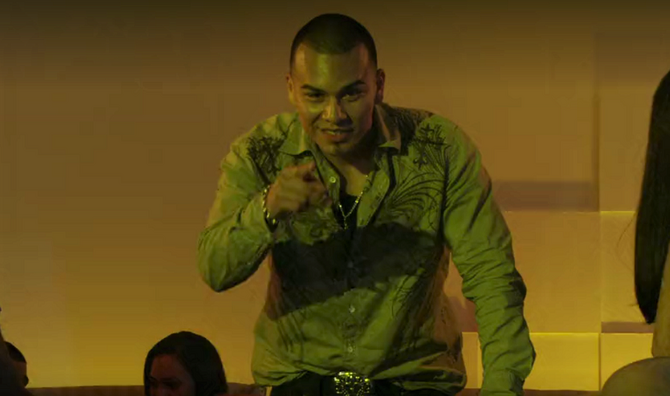 Killing the victims through the use of the machete, sometimes decapitation.

Extort ATM money from their victims in order to pay for their VIP service at Club Mayan
Carlos Fuentes is a character in Season Five of the Showtime series DEXTER.

He and his brother, Marco Fuentes, were the serial killers responsible for the grisly Santa Muerte murders. Carlos was the most prominent of the two brothers, being the one shown on-screen for a majority of the time.

Carlos and Marco, were responsible for at least seven murders in the Miami area. Carlos also nearly killed Jandro Mendoza. Despite the killings, Dexter Morgan showed no particular interest in this case. Instead, he focused on Lumen Pierce and the Barrel Girl Gang.

Carlos was a young, Hispanic man with short black hair and a goatee extending from the bottom of his lip, in the fashion of a patch. He was a fairly muscular man at the height of about 5'8", with his brother being a little taller. One of his outfits consisted of a sleeveless, black shirt underneath an unbuttoned, blue and white striped dress-shirt atop a set of bluejeans with brown shoes. He also wore a silver necklace around his neck.

Not many details are known about Carlos, apart from the fact that he was a very violent individual. He and his brother, Marco, would kill people after they extorted money from them. They then spent the money on women and VIP status at Club Mayan.

In Season Five, a new spree of killings began. The first discovered victim, Nina Alfaro, was skillfully killed. She was decapitated, her body tossed aside, and her tongue and eyes removed postmortem. Her head was displayed as a shrine to Santa Muerte. Her husband, Francisco Alfaro, was killed pointblank with a shotgun (made to look like a suicide). An officer on the scene, Cira Manzon, mentioned that Nina might have been killed by members of a Mexican cult. According to Cira, the removal of eyes and tongue meant, "They didn't see anything; they can't say anything" and it was a message to others to not stand in their way..

Debra Morgan and Angel Batista figured out (from Francisco Alfaro's frantic behavior in a video) that the killers forced their victims to withdraw money from ATMs ). In this case, they held Francisco's wife hostage until the money was withdrawn. Both he and his wife were then promptly killed. Later, the police learned that the money was used by the killers at a local nightclub called Club Mayan to pay for VIP tables, as per records obtained from the club owners.

The first actual first murders were of a couple, Daniel and Awilda Ortiz, in their home. They were both killed with a machete (which partially decapitated their heads). The bodies were left undiscovered for weeks and they became infested with maggots. At this point in time, the Fuentes hadn't mastered the art of killing.

Meanwhile, the killers also murdered a neighborhood informant, Fauzi Goberi, and left his severed, eyeless head on gruesome display in his shop. They committed this murder because he had talked to the police.

It was not until the fourth episode that the identities of the killers were brought to light - the Carlos and Marco Fuentes. Earlier on, it was determined that the crimes were committed by at least two people and these two fit the bill. When the police received a lead on Carlos' location, Debra, along with Cira and members of the homicide division, stormed an apartment complex, weaving in and out of Hispanic residents until the they split up. Debra located a secret room, which was decorated with strange fixtures and relics pertaining to Santa Muerte worship. From an adjoining backroom, Carlos Fuentes emerged with a hostage - Jandro Mendoza. Debra repeatedly ordered Carlos to release Jandro or she would shoot him. Carlos yelled Spanish words at her, while he held a knife to Jandro's throat. Debra hesitated to shoot Carlos because she might accidentally kill the hostage. Carlos told Debra to announce over her radio that it was "Clear" which seemed to imply that he would then release Jandro unharmed. When Debra did so, Carlos used it to his advantage. He called Debra a "stupid bitch," slit Jandro's neck, and threw him at her. Distracted, Debra tried to shoot Carlos but he escaped through a window.

Debra and Angel visited Jandro in the hospital to question him. His mother, Elena Mendoza, showed her gratitude to Debra for saving his life. Jandro told them that Carlos had a tattoo of some sort. This led Debra to seek its meaning at a tattoo parlor that Vince Masuka frequented. Later, Debra learned that the tattoo was actually a hand stamp used for a local night club. She discovered the stamp's design on a wall near the crime scene of the Fuentes' earliest victims.

After a stakeout failed to capture the Fuentes at the nightclub Club Mayan, Lt. LaGuerta planned a "surgical" solution. With Debra and Batista inside a van, LaGuerta on the floor with Officer Cira Manzon and Detective Joey Quinn, intentions were to capture the Fuentes brothers outside of Club Mayan. However, to their surprise, the informant, Yasmin Aragon, noticed that the Fuentes brothers had already entered the establishment via a hidden entrance. Suddenly, LaGuerta changed the plan and Yasmin was sent in to get information.

Unfortunately, Carlos noticed Cira and motioned for her to sit with his group. Lt. LaGuerta gave the go-ahead for her to do so, despite Debra's objections. As Cira sat next to Carlos, he attempted to fondle her leg and discovered a pistol. This caused both brothers to react violently. Officer Cira Manzon was punched to the floor, and Yasmin Aragon was accidentally shot and killed. A shootout occurred between Quinn and Marco, with a a party-goer dying in the crossfire. Debra hurried into the club and faced off with Carlos in a situation similar to their last encounter. This time, Debra took the shot and landed a bullet directly into Carlos' forehead, which spared the hostage.

Carlos Fuentes was Debra's first kill in the series and it was judged as a lawful killing in the line of duty. Debra felt no remorse for killing Carlos. She believed that he deserved to die, which was similar to the thinking of her brother, Dexter. (In later seasons, after discovering Dexter's secret, she sought to use the justice system rather than vigilantism to deal with criminals.)

Murders committed with his brother, Marco 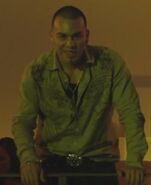 Carlos and hostage inside Club Mayan

Carlos is shot dead by Debra