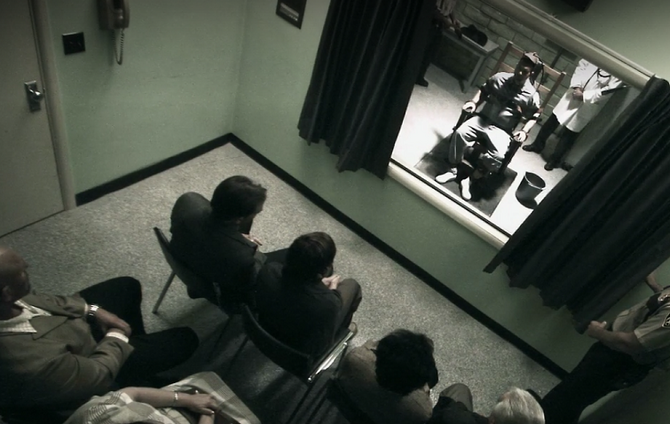 Carl is a character in Season Two of Showtime's series DEXTER.

He was a convicted killer.

Nothing is known about Carl's life, except that he was arrested, convicted for multiple murders, and sentenced to death.

Carl only appears in a flashback in which Harry Morgan takes teenage Dexter Morgan to his execution.. A few of the other witnesses seem to wonder why a juvenile is there to watch him die.

Carl's gruesome death demonstrates to Dexter the importance of following Harry's rules and not getting caught as a murderer.

When he finds out that Rita is pregnant, Dexter undergoes a MRI Scan to look for health problems. He dozes off and dreams of Harry talking about a recently executed serial killer. The man had killed eleven women, then went on to kill his wife, two kids, and the neighbor's dog. Harry compares the brain scans of the killer to Dexter's brain scans. They perfectly match.

Dexter met inmate Carl through his adoptive father, Harry Morgan. After an incident in middle school in which Dexter tried to kill another student, Harry drove Dexter to the jail. Everyone at the jail knew Harry and greeted him with calls of “Hey, Sarge!” as he and Dexter walked to the cell block. For a minute, Harry talked with the guard, who then led them to Carl’s cell. Carl seemed happy to see Harry, and also pleased to meet Dexter who he called a handsome lad. Carl, described as having bright empty dead eyes and blond hair, didn’t appear particularly large or threatening to Dexter, but he still felt uneasy.

Harry told Dexter that Carl was brought in yesterday for killing eleven people, and that he enjoyed killing them. Carl remarked happily, “It keeps me busy.” Harry retorted, “Until we caught you...you got careless.” Out of curiosity, Dexter asked Carl “how” he did it. Carl understood that he was meant to be an object lesson, and insisted that there was no way off the path once you are on it. Harry countered with, “Don’t get caught.” Carl suddenly realized exactly what Harry was trying to teach Dexter and called him a wonderful father. Harry turned to Dexter, saying that Carl was going to be executed because he didn’t know what he was doing, or what the police were doing, and had no training. At that moment, Dexter quit rebelling against Harry and began to follow his training.

Harry and teenage Dexter watch Carl's execution
Add a photo to this gallery
Retrieved from "https://dexter.fandom.com/wiki/Carl?oldid=105103"
Community content is available under CC-BY-SA unless otherwise noted.