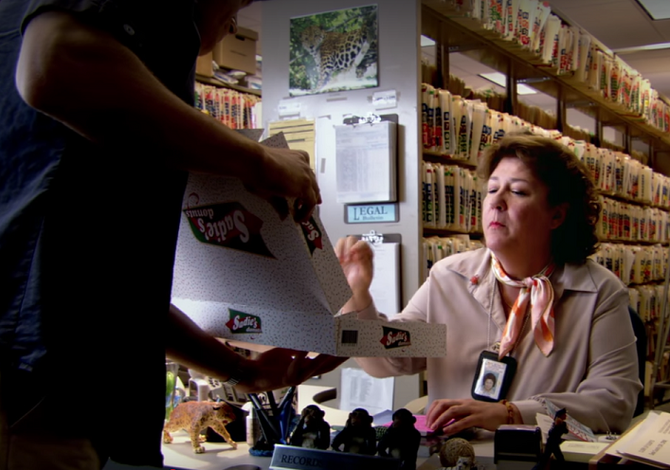 She was a records supervisor for the Miami Metro Police Department.

Camilla and her husband, Gene, were good friends with Harry Morgan and his wife, Doris, and they often played bridge together. Therefore, she knew Dexter Morgan since his childhood and they maintained a friendship through the years. Both worked for Miami Metro Police Department -- Dexter as a blood spatter analyst and Camilla as a records supervisor.

Dexter often brought donuts to work for his fellow employees, always ensuring that Camilla received one. In return, she let him borrow files of suspected murderers, which (unknown to her) he used to target many of his victims. Camilla was curious as to why Dexter borrowed so many files, and he explained that he liked to “help out” in his free time. When Camilla said that he had a morbid sense of fun, Dexter had to agree with her.

Dexter ran into resistance from Camilla when he asked her to dig up the file on the Shipping Yard Massacre. Her friendly expression faded and she said that she couldn’t help him because everything from that long ago was boxed up in the basement of City Hall. She claimed that she was too busy in year-end reports to go looking for it. Dexter asked if there was anything she remembered. Camilla would only say that his [adoptive] father cared enough to bring him into his home and give him a loving family. Dexter wondered why she was not being honest with him.

Dexter soon learned that Camilla knew far more about Dexter's past than she had let on. Having more questions, he went to her house and found her outside, smoking a cigarette and watering her plants. The first words out of Dexter’s mouth were “October 3, 1973!” He continued on, describing in detail the shipyard murders. Camilla remarked that he had “been busy.” He asked again for the the case file, having not found it at City Hall.

Camilla admitted that she had destroyed the file years ago, on the day that Dexter’s adoption went through. Dexter was outraged, thinking that Harry wanted to protect himself. However, Camilla insisted it was because Harry wanted to protect Dexter. Dexter demanded to know the truth, but Camilla just said, “Kid, leave this one alone.”

Camilla met with Dexter in his office. She told him that Sgt. James Doakes had requested the Shipyard case file. When she couldn’t provide it, Doakes became angry and frightened her. Camilla was worried about losing her job, as she was hoping to retire the next year. Dexter reassured Camilla that he would take care of the situation. He soon set Doakes up to be fired because he was digging into Dexter's life.

Maria LaGuerta informed Dexter that Camilla was hospitalized with terminal lung cancer -- the same ailment that her husband died from a year ago. Dexter stated that both had smoked like “chimneys.” He agreed to take the card signed by the department to Camilla.

Dexter arrived at the hospital, carrying flowers. He found Camilla confined to bed, breathing through an oxygen tube. Almost immediately, Camilla mentioned that she has been searching her whole life for the perfect key lime pie. She looked over at her uneaten dessert, a slice of pie made from green jello. She changed the subject and reminisced about smoking with her husband. Camilla said she could handle dying, but the pain was unbearable.

On his next visit, Dexter brought Camilla a slice of key lime pie but she said it was not authentic because it was green and made with fresh milk and food coloring. She told him that he could do better.

Dexter assisted when Camilla was moved to hospice. She remarked that it was the last ride of her life. When Dexter reassured her that she would be around a long time, Camilla replied, “Sure as hell better not be.” Once settled, Camilla said, “This is the room I’m gonna die in. The sooner the better.”

Camilla gave Dexter a shoe box that was filled with pictures that her husband had taken through the years. She then brought up her funeral arrangements. She asked Dexter to call her family who lived up north, when the time came. Dexter thought she was being morbid, but Camilla told him that “death will be a mercy” and she will “get to see Gene.” She reminded Dexter to find perfect the key lime pie...and he better move fast.

Back at the station, Dexter suggested to Debra Morgan that she visit Camilla. However she refused, saying she doesn’t “do sick people” because it reminded her of mom.

Bringing another pie, Dexter entered Camilla’s room just as she threw her dinner on the floor. The nurse told Dexter that Camilla had received some hard news. After the nurse left, Dexter asked Camilla if her tumor was worse. Exasperated, Camilla said, “No, it’s slowing,” and expressed her frustration at having another month to live. She described it as struggling to breath, of shitting herself, and looking at the stupid, fucking wallpaper.

In despair, Camilla said that, having lived with Gene through the end stages of his death, she wished for herself to be on the other side of it. She disclosed that Gene wanted her to end his life. However, Camilla couldn’t do it because she was Catholic and believed that it was a mortal sin and a one-way ticket to Hell. She also couldn’t take her own life. After a few moments, Camilla told Dexter that he wasn’t Catholic. He agreed, saying that he was definitely not Catholic, but lived by a certain code. Camilla began to beg him to help her, amid her coughing and wheezing. Dexter declined, thinking that she couldn’t have asked a better person since he does take lives, but not someone innocent...or a friend.

While in Dexter’s office, Debra found the box of pictures that Camilla had given to him and looked through them. Dexter remarked that Camilla was in a lot of pain. Debra instructed Dexter that if she was ever like that, she wanted him to shoot her, pull the plug, or put a pillow over her head. She added that she would do the same for him, and never let him suffer.

Dexter brought Camilla another bad pie, but she said his efforts gave her something to live for. She then profusely apologized for asking Dexter to take her life. Camilla thought that if Dexter helped her die, he would consider himself a killer -- like his brother. Camilla revealed that she had read his file before she destroyed it and knew about his past. When she read about The Ice Truck Killer in the newspaper, she realized that he was Brian Moser, Dexter's bio brother, but kept it to herself. She promised to take it to her grave and reassured Dexter that he could never be like Brian.

On another visit, Dexter brought Rita Bennett with him. Although Camilla was quite ill, she was very happy to meet Rita who tenderly assisted to her needs.

Dexter decided to honor Camilla’s request. He returned with a true key lime pie and closed the window’s curtains. He placed euthanizing agents inside a slice of the pie, and told her it would make her feel better. Camilla realized what that meant and thanked him. Dexter began to feed it to her, and she said that he had finally brought her the perfect pie.

Just before Camilla passed on, Dexter leaned over and told her that he had killed his brother. She briefly opened her eyes and weakly whispered, "It's good you did."

In-game, after Dexter gives Camilla a donut, she gladly provides Dexter with information that assists him on his mission to prove Jamie Jaworski is guilty of murder.

Camilla is an evidence technician, who has a massive crush on Dexter.

In the sixth book Double Dexter, she is found dead in the back seat of a car, after having been crushed by a blunt object postmortem. When her apartment is investigated, it is revealed that she has been housing thousands of pictures of Dexter, revealing her obsession and putting Dexter in the firing line for her death. The killer was actually Dexter's copycat.

Camilla with a youngerW Dexter

Dexter brings a donut to Camilla

Camilla and her files

Camilla hands a file to Dexter

Camilla confronted by Dexter about file

Dexter visits Camilla in the hospital