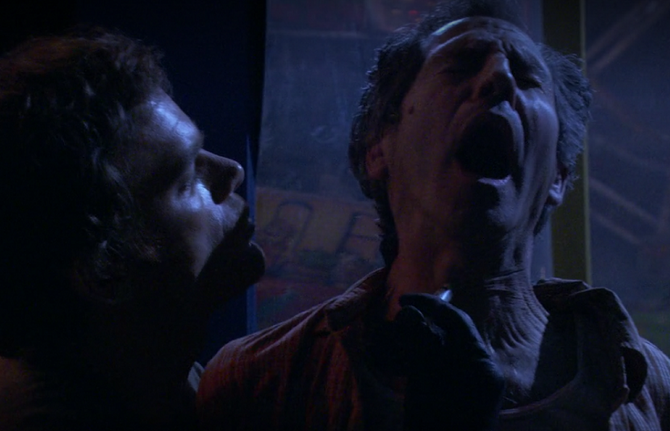 Cal Rooney is a character in Season Three of Showtime's series DEXTER.

He was a carnival worker and murderer who appears briefly in flashbacks.

Dexter Morgan recounts in an ambiguous way what he did over the summer to his dentist. He says that he went to a carnival (flashback of the carnival) and won a prize (flashback to Dexter injecting Rooney with M99, and collecting a blood slide). The dentist hopes that Dexter stayed away from the sweet stuff. Dexter admits that he sometimes indulges (flashback to Dexter killing Rooney with a cleaver). Dexter states that he met new people (flashback to Dexter adding a trophy to his new blood slide box). When the dentist asks Dexter if he still has his boat, Dexter answers, “You bet. It’s the only place I can let everything go” (referring to where he dumps his victims).

Cal’s blood slide is the fifth one in his second blood slide box. Apparently, Dexter killed at least four people since the end of Season Two.

Dexter kills Cal with a cleaver

Dexter's second bloodslide box
Add a photo to this gallery
Retrieved from "https://dexter.fandom.com/wiki/Cal_Rooney?oldid=93126"
Community content is available under CC-BY-SA unless otherwise noted.