Lee was born in Cheongju, South Korea. Film became his passion in his junior year of high school while playing football at Hudson's Bay High School in Vancouver, Washington. Lee attended Cornish College of the Arts on an acting scholarship and graduated with a Bachelor of Fine Arts degree. He graduated from the Yale School of Drama with a Master of Fine Arts degree. Lee then spent eight years in New York City acting with various theater companies, regional theater, as well as television and film. He is married to Lara Cho. 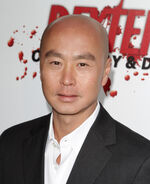