Buddy is a canine character in Season One of the Showtime series DEXTER.

He was the unseen pet of the Billups -- the Morgans' next door neighbors.

The dog continues to bark for an entire night, and Doris Morgan (Dexter's sick foster mother) is unable to sleep. The next day, Buddy is reported missing by the Billups.

Harry Morgan soon finds Buddy's grave. While he is alone with young Dexter on the family boat, Harry brings up the subject.

Harry: "You're different, aren't you, Dexter?"
Young Dex: "What do you mean, pop?"
Harry: "The Billups say Buddy disappeared. I found the grave, son."
Young Dex: (rebelliously) "That dog was a noisy little creep, Dad. He was barking all night, and Mom couldn't sleep. And she's very, very sick, and that lousy dog was yapping at every leaf that blew down the sidewalk!"
Harry: "There were a lot of bones in there, Dexter, and not just Buddy's."

As a homicide detective, Harry has reason to believe that Dexter is showing signs of a future serial killer.

Concerned that Dexter is going to be very dangerous in later years, Harry tries to suppress Dexter's need to kill. When he cannot, Harry teaches Dexter how to channel his urges with the Code of Harry. As an adult, Dexter (with some exceptions) only kills other murderers.

Dexter tells Lumen Pierce that he killed the neighbor's dog when he was twelve in "Teenage Wasteland." 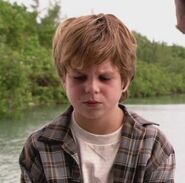 Dexter is questioned by Harry