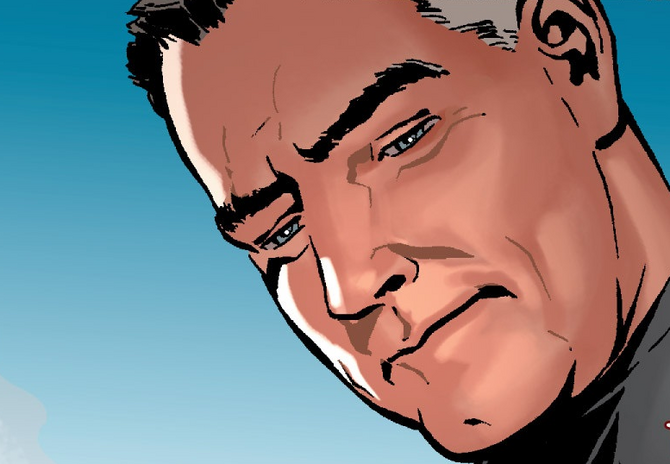 Bruce Grigsby is a character in the DEXTER Comics.

He was a white supremacist, and the CEO and founder of Citizens for a White Australia.

Bruce is a charming millionaire, and a philanthropist of sorts. However, his nature as a white supremacist becomes clear after Shawna and Dexter discuss the recent murders of immigrants with him. He clearly states his disgust for immigrants and anyone else alien to his country.

Bruce seems to live for the thrill of the hunt, and he considers himself superior to his would-be victims. He even gives Dexter and Shawna a heads-up before starting to hunt them.

He demonstrates no regard for the lives of immigrants, giving false hope of freedom to one of his victims, sending the latter to kill Dexter - to no avail, as Dexter kills the unnamed victim.

Hidden in the darkness, Bruce takes out a knife and kills a family of four recently arrived immigrants. The next morning, the bodies are found, but the Canberra police still lacks enough evidence to point to a killer, so they enlist the help of an American expert in the field, Dexter Morgan.

After narrowing a list of possible suspects, Shawna Wiggs and Dexter visit Bruce, viewing him as one of their primary suspects. Bruce receives both with great courtesy, but his disgust for immigrants is obvious to Dexter. He clearly has a motive for the murders, but again, there is not enough evidence to charge him so they leave Bruce's home, Dexter senses Bruce's Dark Passenger looking back at him.

With still not having solid proof of his involvement in the murders of immigrants, Bruce, unseen by Dexter and Shawna is yet again present near the most recent crime scene. Just as with previous crime scenes, he is on top of a nearby building, watching the reaction of the people. He smiles after seeing Dexter and Shawna at the scene.

Dexter later finds out a connection between Grigsby and the murders. Each murder (at least the ones after Dexter's arrival) were committed near a location that belongs to no other than Bruce Grigsby. Dexter also finds out that Bruce owns a website, where the visitors play a mini-game in which the objective is to kill endangered species with a mobile robot that sports some sort of machine gun. Shawna is not happy with such little information as it does not prove that Bruce is involved. However, she is surprised when Dexter tells her that members receive a password and become part of a real life hunt for actual human beings - immigrants.

They both travel to Ayers Rock, to find a far isolated farm belonging to Grigsby, and surprisingly, instead of sheep, they find people imprisoned and ready to be hunted. Grigsby surprises them and shoots both in the chest with a shotgun.

Grigsby has spared both Dexter and Shawna, only to release them in the middle of the desert, barely dressed and ready to be hunted. He gives them some advantage to start running before the hunt begins. And so it does, as Bruce uses a tank-like robotic vehicle to chase both of them, while using a quad-copter as means of surveillance to avoid them from escaping the site.

Grigsby easily catches up to Shawna and gets out of vehicle to stab her, but she fights back with a knife that Dexter buried earlier. While they fight, Dexter appears and shoots Grigsby in his leg. When Grigsby cuts Shawna’s leg with his knife, Dexter uses the other knife to remove his hand before snapping his neck. Dexter and Shawna take Grigsby's body back to the ranch, where they release the immigrants and burn the body.

Bruce talks with Shawna and Dexter

Bruce watches Dexter and Shawna at his latest kill 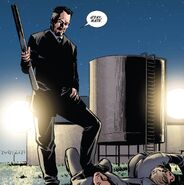 Bruce, after taking down Dexter and Shawna
Add a photo to this gallery

The Armed Robotic Vehicle is an unmanned robotic tank-like vehicle used by Bruce Grigsby to search, hunt, and kill his victims during his games in the Australian desert. It has rifle-like guns mounted on each side of it's front section. It is used in tandem with an hovering camera to search for the participants of Grigsby's games during the hunt. As stated by Grigsby, the advantage of using robots is that they do not get tired. 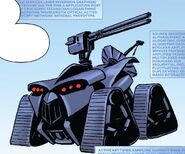 A quad-copter, mounted with a camera, is used in tandem with the robotic vehicle to search and eliminate targets. The copter follows the victims from above and into the woods.

Add a photo to this gallery
Retrieved from "https://dexter.fandom.com/wiki/Bruce_Grigsby?oldid=112259"
Community content is available under CC-BY-SA unless otherwise noted.