Brian Moser's Residence is a location in Season One of the Showtime series DEXTER.

It is an apartment located on a beach in Miami where The Ice Truck Killer committed many of his murders.

Brian Moser (under the alias of Rudy Cooper) moved into this apartment several years prior to current events. To prevent bring discovered as The Ice Truck Killer, Brian installed a security camera and an industrial grade lock on his door. Near his kitchen, he set up a large refrigeration unit to aid in his plan to jolt the memory of his brother, Dexter Morgan. His scheme included creating crime scenes that resembled their mother's murder in the Shipping Yard Massacre.

After bringing a prostitute to his place, Brian subdues her, hangs her upside down, cuts her throat, and collects the blood in a large metal trough. He stores the woman's blood in a plastic bucket labeled with her name. (In "Seeing Red," Brian uses the collected blood to cover Room 103 in the Marina View Hotel to resemble the shipping container.) Next, he dismembers her body into symmetrical pieces and neatly wraps them for public display.

Hoping to get Rudy’s attention, Dexter posts an ad on Craig’s List under missed connections. The ad reads: “Dear Ken, I’m in pieces. Why the cold shoulder? Love, Barbie.”

Brian calls Debra to say that he’s running late because he needs to finish some housework because he is a neat freak. She says he is full of surprises and he says she has no idea. After he hangs up, he sits down at his computer and anonymously replies to Dexter’s ad: “Barbie, Be patient. One day we’ll share a cold one.” On his desk is a headless Barbie doll. He then walks over and enters a large freezer. Inside are shelves of buckets of blood and a table upon which body parts are strewn. After donning gloves, goggles, and an apron, Brian picks up a reciprocating saw.

Brian picks up Monique, a hooker, and takes her back to his place. While they’re in bed, he subdues her with a chokehold and carries her over his shoulder into the freezer. As he’s wrapping up her dismembered body parts and stealing her ring, Debra unexpectedly arrives at his door (numbered 23) and rings his buzzer. Brian views her on his security camera and, though annoyed, welcomes her inside with Debra mentioning how cold he feels. They sit together in discussion, as he kisses her and tries to persuade her to leave town for the weekend so they can talk. However, Debra says she can’t go away at this time. When she tells “Rudy” that she needs to sleep, he gives her Valium in addition to wine. After Debra falls asleep, Brian takes Monique’s wrapped body parts to Santa's Cottage where he leaves them, along with a video of her being killed.

At the station, the team views the video of Monique, which shows her hanging upside down, crying. They realize that she’s inside a monster refrigeration unit, custom built, and bigger than a standard commercial freezer. Having worked in Vice, Deb says that hookers avoid factories or warehouses, so the police begin to look for a residential property.

When Dexter figures out that “Rudy” is likely the Ice Truck Killer, he tries to break into his apartment. However, due to an industrial grade lock, he can’t. Dexter also notices a security camera. Instead, he gather’s Rudy’s DNA from trash that was left outside.

After Debra is kidnapped by “Rudy,” his apartment becomes a crime scene. When Dexter arrives, Maria LaGuerta points to the freezer. Inside, he finds the buckets of blood, kill tools, and an adjustable table. Vince Masuka is wearing a heavy coat and Dexter mocks him for his fear of hypothermia. A home setup like this, Dexter thought, must taken years to put together. He must have hated leaving it behind.

Dexter orders Karen, a tech, to meticulously collect and record every bit of evidence, and then goes to check out the rest of the apartment. After a brief conflict with James Doakes, Dexter notices a technician bagging evidence. One of the items is a record player with the record “Born Free” on its turntable. Another is a Barbie doll lettered with the message “Home Sweet Home.”

Dexter tracks Brian to Laura Moser's old house where he stops him from killing Debra, however, Brian escapes. Later that night, Dexter lures Brian to his own apartment successfully capturing him.

Brian wakes up in his own place, strapped to his adjustable table, inside his refrigeration unit. Using Brian’s M.O., Dexter slices his throat, hangs him upside down, and lets him bleed out.

The next morning, the police rule Brian’s death as a suicide. 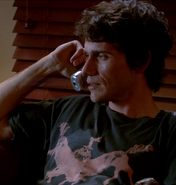 Dexter is stymied by Brian's lock