In 2006, he played Tony Tucci, a man who suffered amputations by The Ice Truck Killer, on Showtime's DEXTER.

Henke was drafted by the New York Giants in the 1989 NFL Draft but cut. He was picked up by the Denver Broncos, and he played in Super Bowl XXIV against the San Francisco 49ers. Repeated injuries, which required six ankle surgeries, led to his retirement from professional football in 1994.

Henke began acting in 1994, starting with commercials. He appeared in the films October Road, Around June, The Amateurs, World Trade Center, In the Valley of Elah, Choke, Sherrybaby, Must Love Dogs, and Fury. His television career includes roles on ARLI$$, ER, Lost, Justified, The Office, Orange Is the New Black, MacGyver (2016), and Sneaky Pete.

Henke was born in Columbus, Nebraska. He attended the University of Arizona and played football as a defensive lineman. He was married to actress Katelin Chesna from 2001 to 2008. 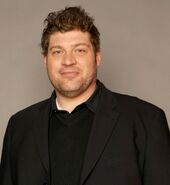 Add a photo to this gallery
Retrieved from "https://dexter.fandom.com/wiki/Brad_William_Henke?oldid=106152"
Community content is available under CC-BY-SA unless otherwise noted.