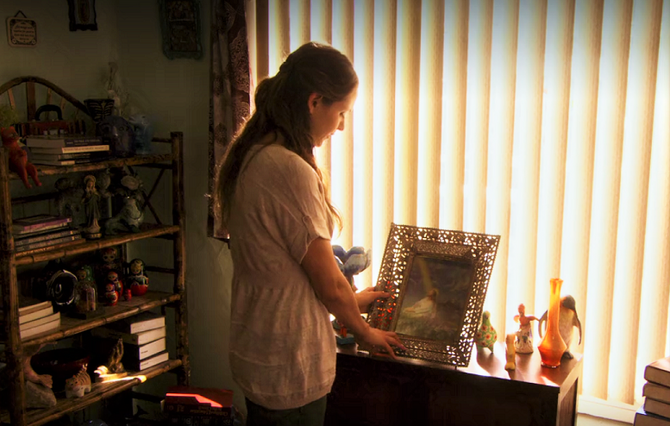 Beth Dorsey is a character in Season Six of Showtime's series DEXTER.

She and her husband, Steve Dorsey, were disciples of Travis Marshall aka The Doomsday Killer.

She is a meek, religious woman who follows her husband's lead.

Beth’s husband, Steve (under the name Doomsday_Adam), is a follower of Professor James Gellar’s website (taken over by Travis Marshall). It is appropriately named The Beginning of the End, and functions as a blog for entries relating to the End of Days. Both Beth and Steve believe that the end of the world is nigh.

After Travis reads one of Steve’s supportive blogs, he pays a visit to their home. The Dorseys are honored and welcome him with great respect. Travis tells them that their time is come and the faithful will be given untold riches in God’s new kingdom...if they trust and obey. Steve says they are ready and will do whatever he says. Travis states that he first needs to know if they are “fully committed.” Beth sits quietly, slightly bewildered by Travis’s comments.

Travis takes Beth and Steve to the Ricochet Rabbit (yacht) and, when Holly Benson arrives, they capture her. After Holly is gagged and tied to a chair, Travis reveals they’re going to kill her. Although Beth believes that Travis is carrying out “God’s plan,” she balks at murder. Travis reassures Beth, saying that Holly is a whore; they will be purifying her sins, and her soul will know paradise. Beth whimpers and reluctantly nods. First, Travis slashes Holly’s throat, then Steve stabs her in the chest. Her body is fastened to the anchor and lowered into the water. Steve stays alone on the yacht to clean up, where he is soon murdered by Dexter Morgan.

Later on the day of Holly’s murder, Sgt. Angel Batista receives information from Louis Greene about Steve Dorsey. He goes alone to the Dorsey house to talk to Steve, but Beth answers the door. Angel (unaware that Travis is in the house) goes inside and asks about her husband’s blogs. Beth says that they are just a joke, so Angel assumes that Steve is not involved with Travis. On his way out, though, Angel notices a row of Gellar's books and begins to ask Beth about them. Suddenly, Travis knocks Angel over the head with a large cross in front of a horrified Beth. Travis takes Angel’s arrival as a sign that the Miami Metro Police Department is meant to be their target for Wormwood.

Travis instructs Beth to take the Wormwood canister (hidden inside a University of Tallahassee backpack) to the offices of Miami Metro Homicide. She bypasses the metal detector at the visitor's entrance by nervously using Angel's key card. Successfully inside, Beth asks the officer on duty to see Lt. Debra Morgan, saying that she has information concerning Wormwood. After being told that Debra is in the field, Beth nervously takes a seat and waits for her to return.

Dexter arrives back at work and notices Beth sitting near the entrance. When Debra returns, she is told by the officer that a woman is waiting who has information on Wormwood. At the same time, Dexter notices a picture on the internet of Steve and Beth. He realizes that the woman he saw is Steve Dorsey's wife. He looks out of his office window and sees Debra escorting Beth to the interrogation room. He recognizes the logo on Beth’s backpack just as she pushes an activation button on it. Moving quickly, Dexter shoves Beth into the interrogation room and holds the door closed by using his body weight. Dexter orders Debra to evacuate the building.

Beth, sealed in the room with the active Wormwood device, begins to to cough up blood, quickly succumbing to the gas. Although Dexter contains Wormwood, he is exposed to a minuscule amount of gas. While not enough to kill him, the effects later cause Dexter to lose consciousness while stalking Travis at the marina. 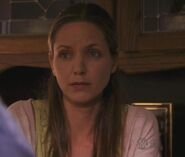 Beth and Steve listen to Travis

Steve and Beth after Holly is murdered

Beth tells Angel that her husband's blogs are just a joke

Beth promises to have Steve take down his blogs

Books in the Dorsey house

Travis knocks out Angel with a cross

Dexter traps Beth with poison gas
Add a photo to this gallery
Retrieved from "https://dexter.fandom.com/wiki/Beth_Dorsey?oldid=105335"
Community content is available under CC-BY-SA unless otherwise noted.