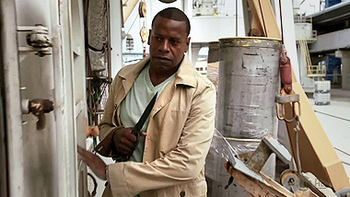 Benjamin Caffrey: Hitman for the Koshkas

Killed victims by slitting their throats

Hitman, although his sadistic tendencies imply that he enjoyed the kills
Benjamin Caffrey is a character in Season Seven of the Showtime series DEXTER.

He was a hitman from New York working for the Koshka Brotherhood.

Benjamin Caffrey and Oleg Mickic were hired by George Novikov to kill Isaak Sirko. When Isaak found this out, he called Oleg in an attempt to keep them from killing him. Since Isaak had "made both men rich" in the past, he hoped that they still had some loyalty to their former employer. However, Oleg told Isaak that they had already accepted the contract.

Seeking help, Isaak promised Dexter Morgan that if he killed the hit men for him, he would let Dexter live, but Dexter refused to do it. Then Isaak tried a new tactic. He had his bodyguard, Jurg Yeliashkevych, kidnap Hannah McKay, threatening to have her killed unless Dexter changed his mind. Worried about Hannah, Dexter then agreed to help kill the hit men. Isaak informed Dexter of the hit men's methods of killing. Oleg preferred to kill from a distance using firearms, whereas Caffrey preferred to kill up close using a knife or a garrote.

Oleg Mickic was killed first by Dexter and Benjamin notified George at The Fox Hole that he couldn't get in contact with Mickic. George told him to follow Dexter Morgan, thinking that he would lead him to Isaak. Benjamin tracked Dexter to one of the Phantom Arsonist crime scenes and followed him from there. Along the way, Benjamin informed George that Dexter was leading him to a port where the Koshka Brotherhood had a freighter for transporting their heroin.

Benjamin stealthily followed Dexter onto the freighter and took out his knife. As he approached him, Dexter took out his own knife. Before he could use it, Isaak called out "Sweetheart!" from above, causing both Dexter and Benjamin to turn around. Isaak then gunned down Benjamin using a silenced pistol. Isaak didn't shoot Dexter, though, saying that he was a man of his word.

Isaak and Dexter dumped Caffrey's body and their own weapons overboard. While Dexter used a hose to clean up the blood, George arrived and shot Isaak in his abdomen. It appeared that George intended to fire another gunshot, this time to Isaak's head but he fled, knowing that Dexter was approaching.

Caffrey follows Dexter to the Fearless

Isaak kills Caffrey, after he is lured into a trap by Dexter