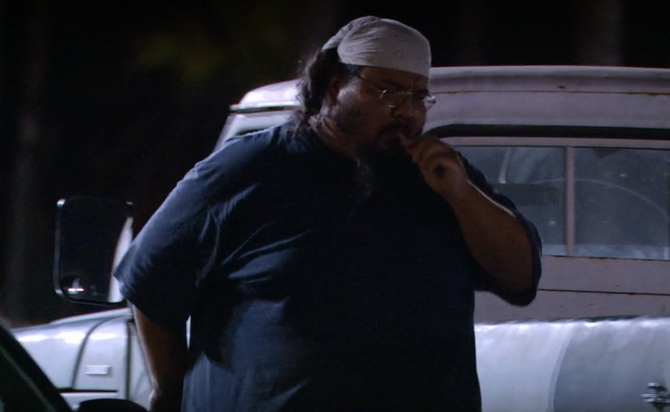 Became infuriated at the victim due to rivalry and constant arguments with him. He put an end to it by finding out his real name and place of work, and killing him.

Benjamin Alvaro is a character in Season Two of the Showtime series DEXTER.

He is an internet blogger who killed his online rival, Denny Foster.

Benjamin Alvaro was engaged in an online feud with a fellow blogger named Denny Foster. This flame war escalated until Alvaro paid a visit to the comic book store where Denny was working nights. He grabbed a snow globe and repeatedly bashed Denny over the head. Because Alvaro stole no money from the scene, the police suspected that the crime was personal.

Alvaro's 1971 pickup truck was caught on a security camera in a nearby restaurant's parking lot after the comic book store closed. He was arrested by Lt. Maria LaGuerta and Sgt. James Doakes during a stake-out of Alvaro's workplace.

LaGuerta and Doakes on Alvaro stake-out

Alvaro arrives at work
Add a photo to this gallery
Retrieved from "https://dexter.fandom.com/wiki/Benjamin_Alvaro?oldid=120900"
Community content is available under CC-BY-SA unless otherwise noted.