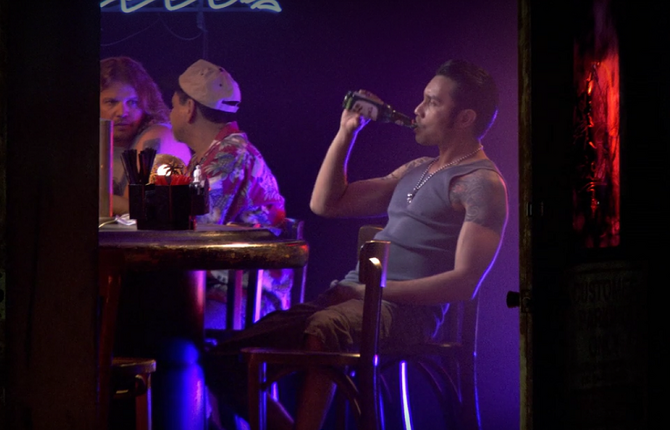 Benito Gomez: The Lost and Found

Remains to Be Seen (Corpse)

Stabbed in the chest by Dexter Morgan.

Beats them so badly that their faces become disfigured

Benito "Benny" Gomez is a character in Season Four of the Showtime series DEXTER.

He was a former boxer who beat two people to death, severely disfiguring them in the process.

Benny used to be a former boxer until he was kicked out for an unknown reason (most likely due to his temper issues). After this, he beat his girlfriend to death so bad that the dentist had a hard time identifying her. He was later arrested and convicted of the murder and spent five years in prison. He later beat an unnamed father of two to death so bad that his cheek bone broke causing his eyeball to be pushed up and out of his face, with one of his sons as the only witness to the crime.

Gomez was arrested by Joey Quinn and was being prosecuted for murder. However, a fatigued Dexter brought the wrong evidence to the court, severely jeopardizing the prosecution's case. As a result, Gomez was found not guilty, causing Quinn to get very upset with Dexter.

In an effort to make up for his mistake, Dexter later tracked down Gomez when he was in his trailer, drugged him, and took him to an abandoned boxing training facility outside the city. Gomez recognized Dexter from court, but only had time to say "I know you..." before Dexter stuffed his mouth and covered it when Rita called Dexter's cell phone. Dexter ended up having to cut his usual kill ritual short when Rita told him that Harrison had an ear infection and that she needed Dexter to pick up medication immediately. Dexter then quickly killed Gomez by stabbing him in the heart. He didn't have enough time to properly dispose of the body.

When Dexter suffered a severe car accident on the way home, he lost his recent memory and spent the entire next day trying to remember what happened, fearing the body was tossed out in the car accident. He eventually remembered that he stuffed the remains inside an old punching bag and suspended it above the ring. With relief, he moved it out to sea where he disposed of it for good.

After dark in Benny's trailer park

Closeup of Unnamed Father of two