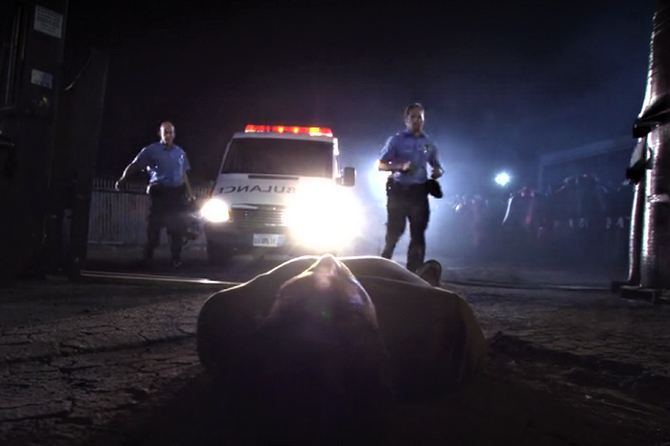 Ben and Roger are characters in Season Six of Showtime's series DEXTER.

They are Miami paramedics that work at scenes where someone is sick or injured and needs immediate aid. They are referred to by dispatch as Team 42.

These two paramedics made a quick buck by letting or making some of their patients die. They had a partnership with an emergency room doctor who then harvested the body parts.

Ben is a scruff man in his 30s with short brown hair. He wears a blue button-up short sleeve shirt, black dress pants, and black dress shoes as his paramedic uniform.

Roger is a bald, older man in his 40s with a matching uniform.

Both are equipped with basic paramedic supplies, including white and blue plastic gloves.

Not much is known of their personalities. Both men try to make it seem as if they are doing nothing wrong. At one time, they may have been honest paramedics, but became cold-blooded murderers.

Dexter Morgan, usually a very careful man, finds himself wandering in a warehouse district with a bloody knife and an apparent wound on his body. He brings up a phone, calling for an emergency team to come pick him up. Ben and Roger, likely given this area of patrol, answer the call and proceed to the location (likely taking their time in order to see if the victim would pass on in time for them to do their "alternate" work).

As the ambulance arrives, both men approach Dexter who is lying on the ground apparently near death or dead...but find themselves simultaneously injected with M99. Both men fall down and Dexter rises up, completely unharmed as he drags them to the ambulance in another successful attempt in subduing his victims.

When they come to, Ben and Roger are handcuffed to the gurneys inside the back of the ambulance. Dexter speaks to both men, calling them by name. Roger asks what's going on and how he knows their names. Dexter explains their crimes to both men, saying that they let some live and some die in order to harvest their body parts. He says that the corrupt emergency room doctor who was selling these parts was arrested, but Dexter figured he had a regular supplier and, through research, he came across these two. Roger tries to defend both of them by claiming they were only trying to help, but Dexter stops him, retorting that they were only trying to help themselves for a quick buck.

Wasting no more time, Dexter uses the nearby defibrillator to shock both men's hearts until they stop beating and they are dead. He later disposes of their remains in the Gulf Stream and stores their bloodslides in his case back at his apartment..

Ambulance on the way

Dexter lies on the ground as EMTs arrive

EMTs about to examine Dexter

Dexter injects both Ben and Roger with M99

Dexter taking Ben and Roger's blood, before stopping their hearts

Dexter stops the hearts of Ben and Roger

Ben and Roger, deceased
Add a photo to this gallery
Retrieved from "https://dexter.fandom.com/wiki/Ben_and_Roger?oldid=104917"
Community content is available under CC-BY-SA unless otherwise noted.