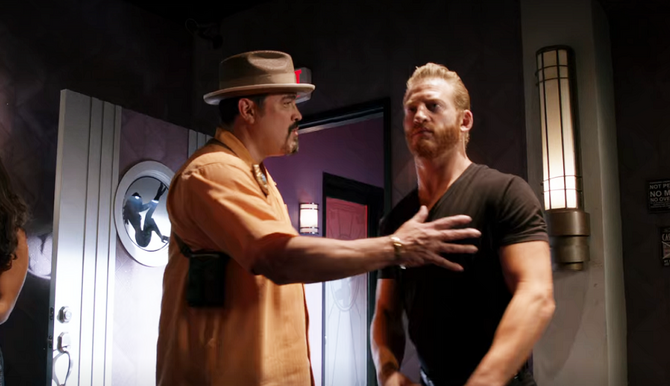 Belligerent Bouncer is a character in Season Seven of the Showtime series DEXTER.

He works as a doorman and bouncer at The Fox Hole.

As they walk into The Fox Hole, the bouncer stops them.

Bouncer: “Where do you think you’re going?”
Quinn: (angrily pushing past the bouncer) “I’m here to see George.”
Angel: (holding back the bouncer) “Why don’t you stay here with me? Hmm?”

When Quinn enters the club's office, George points a gun at him, but then sets it down. George demands that Nadia tell Quinn who owns her, but she smacks him in the face. George slaps her back which infuriates Quinn. He warns George that he will shoot him if he slaps her again. George doesn't believe him and hits Nadia even harder. Quinn promptly shoots and kills him. Quinn quickly makes it look like self-defense by having Nadia shoot him in the arm.

Hearing gunfire, Angel rushes into the office. He’s skeptical of Quinn’s explanation of what happened due to a time lag between shots, but agrees to write the report with his version of events. Quinn insists that Nadia can't be a witness due to her being here illegally and the Koshka Brotherhood will kill her. They allow Nadia to take her passport and some money from the safe. As she leaves, Nadia apologizes to Quinn. She is never seen again, supposedly having moved to Las Vegas.

Bouncer confronts Quinn
Add a photo to this gallery
Retrieved from "https://dexter.fandom.com/wiki/Belligerent_Bouncer?oldid=112832"
Community content is available under CC-BY-SA unless otherwise noted.