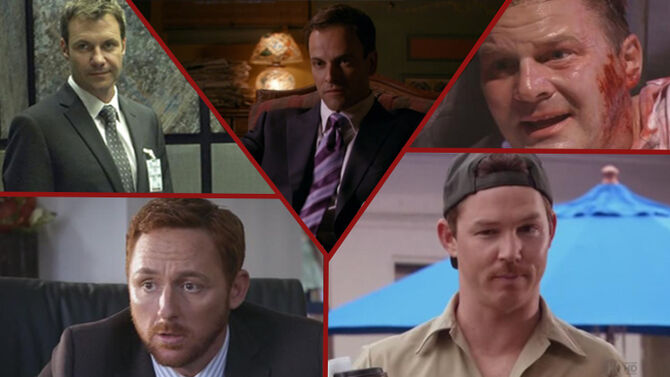 They are a group of five men responsible for the rape and torture of fourteen women, ending in the murder of twelve of them. They are behind the deaths in the Barrel Girls Case.

The rapes began with that of Emily Birch (their original victim) and continued until that of Lumen Pierce (their last victim) when Dexter Morgan intervened.

Five teenage boys - Eugene Greer, Cole Harmon, Alex Tilden, Boyd Fowler, Dan Mendell - spent the summer at River Jordan Camp near Miami, FL. While there, they were persuaded by their leader, Eugene, to gang rape a young woman at the camp. They chose Emily Birch, a trainee camp counselor just a year older than them. They brought Emily to an empty cabin where she was raped repeatedly by each of them, EXCEPT Eugene. He stood off to the side, shouting that each man should "Seize their Desires." When they were finished abusing Emily, Eugene ordered her to take a picture of the five of them. Eugene was standing at the far left, Dan Mendell beside him, Cole Harmon in the middle, Alex Tilden to the right of Cole, and Boyd Fowler at the far right. The picture had an innocent appearance, but it captured the memory of when they took their first victim.

As the years passed, they kept in contact with one another. Eugene Greer changed his name to Jordan Chase and wrote several books that would become bestsellers, propelling him to a level of popularity only dreamed about. Jordan hired Cole Harmon as his Head of Security, Dan Mendell moved on to become a dentist, Alex Tilden became a successful banker and, oddly enough, Boyd Fowler ended up working for the Department of Sanitation, picking up road kill. Despite their career differences, they would keep meeting to torture and rape a woman for at least a week before having Boyd to kill her. They did this with at least twelve women before Lumen Pierce. With Lumen, they abducted her, raped her, tortured her, and prepped her to be executed, but Dexter Morgan intervened before Boyd was able to kill her.

All five members are identified by Lumen Pierce, Dexter Morgan, and Emily Birch.

Though every member of the group are culpable for the kidnap, rape, torture, and murder of the victims, some members may have had more prominent roles at each stage.

Each of the girls were numbered, based on when they were taken by the Barrel Girl Gang.

Like most other serial killers, the Barrel Girl Gang took trophies from their victims.