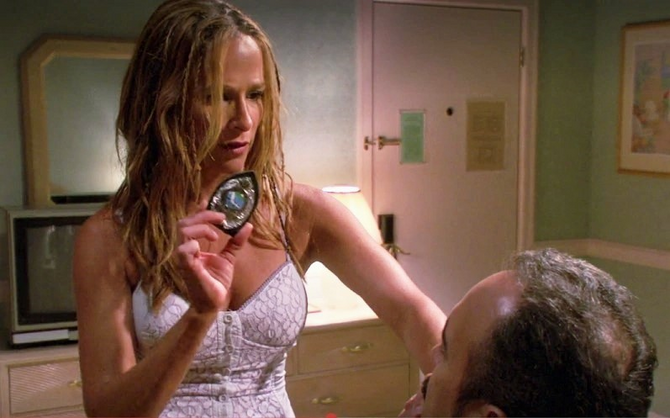 Barbara Gianna is a character in Season Three of Showtime's series DEXTER.

She is a Miami Metro Vice Detective who works undercover.

Barbara is a woman in her early 30s with straight, blonde hair.

Gianna is strong-willed and takes her job seriously. She is able to perfectly portray a prostitute's attitude -- seductive, but will demand the cash first.

Initially, she refuses to go on a date with Angel Batista because he had sought the company of prostitutes. .

Angel thinks highly of her, but seems taken aback when he discovers Gianna and Vince Masuka enjoying themselves by discussing sexual perversions.

Gianna first encounters Sergeant Angel Batista in a hotel room when he thinks that he is meeting a prostitute. As she leads him on, she notices his police badge, Gianna discreetly warns Angel that it's a sting, and throws him out of the room, yelling that he is a deadbeat with no cash.

Gianna later appears in Angel's office and confronts him about his solicitation of a prostitute. Angel makes the excuse that he was simply seeking human connection to fill the loneliness in his life. Gianna mood lightens somewhat, and she says that she won't file a police report if he keeps it in his pants..

Angel makes several failed attempts at asking Gianna out, but she says that she rarely dates cops. Eventually, he convinces her that he has a sensitive side and can be trusted. She decides to give him a chance, and the two begin to date. They enjoy each other's company, and Gianna even brings him food on the job. Angel is furious when she is attacked while working undercover and vows revenge.

Although they are seen together at Rita and Dexter's wedding, they have broken up by the beginning of Season Four. Angel tells another cop that they wanted different things.

Retrieved from "https://dexter.fandom.com/wiki/Barbara_Gianna?oldid=107686"
Community content is available under CC-BY-SA unless otherwise noted.