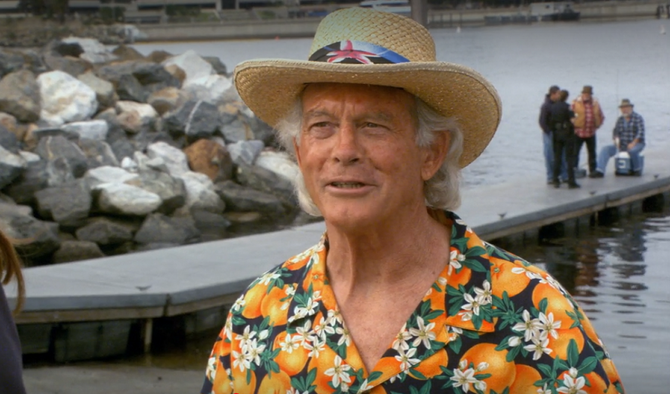 Banana Boat Tour Guide is a character in Season Two of the Showtime series DEXTER.

He discovered the body of Rafael Arenas, a victim of Little Chino.

The tour guide found Rafael’s body lying on the rocks of a Miami breakwater. While detectives and forensic team investigated the site, Debra Morgan interviewed the tour guide. He said that he discovered the body at 7:00 a.m. when he started to prep his boat for his Miami Banana Tour. The guide described the tour as a calypso journey through Miami’s inner harbor. He gave Debra a brochure and suggested that she try it. Debra asked a couple more questions, and the tour guide went to hand out his brochures to bystanders.

During Debra’s interview of the tour guide, a few people recognized her as The Ice Truck Killer’s ex-girlfriend. One obnoxious man continually made wisecracks, even telling her to turn around and “act scared.” Although angry, Debra managed to keep her cool. To the crowd's delight and Maria LaGuerta's relief, Debra smiled and waved as her photo was taken.

Tour guide gives Deb info
Add a photo to this gallery
Retrieved from "https://dexter.fandom.com/wiki/Banana_Boat_Tour_Guide?oldid=113052"
Community content is available under CC-BY-SA unless otherwise noted.