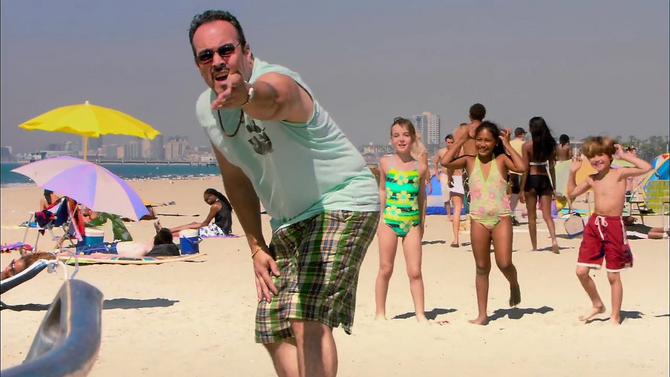 Auri Batista is a character in the Showtime series DEXTER.

She is the daughter of Sgt. Angel Batista and his ex-wife, Nina Batista. Her aunt is Jamie Batista, Angel's younger sister and Harrison Morgan's nanny.

Of interest, her name is pronounced "Out-ee." This could be a way Cubans pronounce it as Angel is typically referred to as "Ahn-Hel."

Auri is a young, Latina girl with darker-toned skin than her father and long, black hair. Her clothes are that of a typical girl her age.

Auri never has a speaking role in any of her appearances, so personality wise there's not much to say. She likes to wear pink and has a princess-style bedroom.

Angel hopes to reunite with his estranged wife on their ten year anniversary. Wearing a suit and tie, he brings gifts for her -- flowers and a diamond key necklace. However, when he shows up at their house, Nina is not pleased to see him. Angel says they’ve been separated for three months, and asks how much more time she needs. Nina sternly replies, “I need as much time as I need.” Despondent, Angel turns to leave, but Nina says that he can see Auri as long as he’s there.

Angel enters Auri’s bedroom where she is sound asleep. He whispers a few words in Spanish to her, kisses the top of her head, and then hangs the necklace on the bedside lamp. He slowly walks out of the room, passing by Nina in the doorway.

Angel is admitted to the hospital after being stabbed by The Ice Truck Killer, and Auri is shown sitting in a waiting area. When Maria LaGuerta announces to all present that Angel’s surgery was successful, Auri begins smiling.

While Angel is helping Lila paint her loft, he receives a phone call which makes him smile. After he hangs up, he tells Lila that it was his little girl, Auri. He says that his ex-wife never lets him see her on weekends, but something came up so he can spend all day with Auri on Saturday. Lila changes the subject.

Angel is looking through a paper for a circus as he and Dexter are buying coffee at the food truck. He asks Dexter what a seven-year-old likes, and Dexter says that Astor likes CNN. Angel says, “Yeah, that’s not gonna fly.” He explains that he has Auri on Saturday and wants something fun to do with her -- more fun than what she does with her mother. When Dexter remarks that he and Rita are taking the kids to the beach on Saturday afternoon, Angel says that’s perfect and asks if they can tag along. Dexter, taken off guard, agrees but tells Angel he wants Lila to stay away.

On Saturday, Angel is chasing Auri, Astor, and Cody around the beach while Dexter and Rita relax in beach chairs. When Angel tries to get Dexter to take over for him, Dexter says his leg “feels tight.” Actually, it’s because his leg hurts from being grazed when James Doakes shot at him.

Angel and his sleeping daughter
Add a photo to this gallery
Retrieved from "https://dexter.fandom.com/wiki/Auri_Batista?oldid=106042"
Community content is available under CC-BY-SA unless otherwise noted.