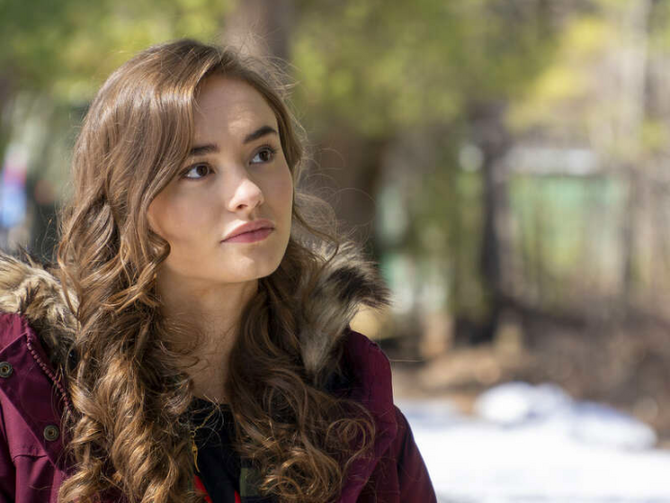 Popular at Iron Lake High School, Audrey is always the first to rally her classmates to protest injustice in their community. And she’s never afraid to speak her mind, no matter who it might offend, which sometimes makes for trouble with her mother.

Audrey invites a lot of her friends over, triggering her mom's smart doorbell and alerting her back to the house. Later on, Audrey's mom, Angela Bishop, catches her at a protest. She is amongst a group screaming “Drilling is killing, save the planet, shame on you” outside of Iron Lake Tavern where a petrol billionaire is holding a meeting. Her mom asks her if she has a math test today but Audrey doesn't seem bothered by her mom's concerns, feeling that the protest is more important. When the billionaire walks out and offers the protesters free hot chocolate, Audrey takes it then dumps it out in front of him.

Audrey and some of her school friends come to join the search party for Matt Caldwell. Audrey makes eye contact with Harrison and he approaches her. They chat about their parents and she introduces him to Zach and Scott.

Audrey and her friends go to some locked cabins in the woods where Harrison helps them break in to smoke pot and hang out.

Audrey and Harrison go to Gig’s to pick up some sausage and find out that the buck is hanging in the back. They are upset that it’s just being treated like roadkill. Audrey opens up to Harrison about her birthmother who abandoned her and her father. Her car breaks down and she sends Harrison down the road to the auto shop to get some supplies.

Edward Olsen drives up and offers to help Audrey, but she refused his help telling him to help the planet instead. He comments on her gas guzzling car and drives away.

Audrey invites Harrison over to dinner with her mom and Jim (Dexter). At dinner, Audrey explains her plan for the white buck - to have a bonfire to honor it. They do it that night.

Audrey visits her mom at the police station and accidentally sees Ethan's notebooks full of horrific drawings and a list of names from students at the high school, including Audrey's. She secretly takes a photo of it and shows it to her classmates, alerting them that they were on "Ethan's kill list".

Sergeant Logan has to come to the high school after this to talk to Audrey and the other kids about the list and to offer them counseling.

Audrey asks Angela if she can go hang out with Harrison and the rest of the guys and Angela reluctantly agrees. Audrey ends up going to a party with them - the "Kill List" party.

Harrison talks to Audrey at the party about Molly Park’s podcast. Audrey admits that she was the one who released the Kill List. Later on, Audrey walks up to Harrison to see if he’s okay. She tells him to go get some water with her. He tells Audrey Jim (Dexter) thinks Harrison is a liar. He tells her his real name isn’t even Jim Lindsay and asks if she believes him. She says yes before he passes out. She runs to get her phone to call 911, saving Harrison's life.

Later on, Audrey tells her mom what Harrison told her about Jim.

Audrey finds Harrison at school to see if he’s okay. She asks him to hang out later that night to study for the chemistry quiz. He gets a text from Dexter about going to therapy and tells Audrey he can’t hang out after all.

Harrison climbs into Audrey’s window and she suspects he’s a burglar and grabs her nunchucks. He tells her he wants to talk and opens up to her about his therapy session with his dad. He admits hurting Ethan wasn’t his first time hurting someone. He admits he thinks about hurting everyone, all the time. Audrey tells him she gets it and opens up about her past and how she feels like she doesn’t belong anywhere. “We’re outsiders you and me, but it doesn’t have to destroy us,” she says. They kiss.

The next morning, Angela walks into Audrey’s bedroom and sees Harrison in her bed, shirtless.

At school, Harrison asks Audrey if she wants to hang out but Audrey tells him she has to lie low because her mom was upset. Audrey confronts him about breaking his competitor’s elbow after the guy tapped out.

Audrey loads a Christmas tree onto the roof of the car, with help from Zach who laughs with her as they put it up there.

Audrey and Angela invite Jim (Dexter) and Harrison over to exchange presents. Audrey makes monkey bread for Harrison. She tells Harrison he seems happy and he tells her he found a way to let go of her anger. They all open presents together. The doorbell rings and Kurt is at the door with a gift. Kurt sees Jim (Dexter) and Harrison and they exchange a few words before Kurt leaves. Dexter and Harrison abruptly leave and tell Angela he’ll be back later that night. Audrey finds their quick departure weird.

Audrey and Angela go to Jim and Harrison's house after they find out it is burning down. Audrey begs Angela to let them stay with them. They all go back to Angela’s house.

Audrey makes pasta with Dexter and Harrison at her house when her mom walks in and suggests they go to the store to get a few more things. She leaves with Harrison.

Later on, after Dexter gets arrested, Angela suggests to Audrey that she give Harrison some space. She listens until Harrison shows up at her door to get his stuff. Audrey apologizes to Harrison about how it’s her fault- she told her mom what he said at the party about Jim Lindsay's name being different. They hug and kiss. Harrison leaves in the middle of the night.

As Harrison leaves town, he drives by Audrey's house and sees her in the window but he doesn't say goodbye.

Audrey is gifted a scarf from Harrison

Harrison and Audrey at police station after Dexter is arrested