Start a Wiki
Arthur Bleek is a Character in Dexter Comics.

Revealed later, he was an undercover Federal Agent,

Steve Gonzalez said that Arthur once lived on the streets, until he requested help to change his life at the New Hope Foundation.

Bleek dies after he is stabbed in the back by an unknown assailant and his body is found in a parking lot. Upon examination, Dexter discovers that he was killed elsewhere, dumped in water, and then transported to the parking lot.

It is revealed that Bleek was investigating Steve Gonzalez, who killed Bleek once he discovered it. 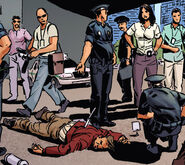 Add a photo to this gallery
Retrieved from "https://dexter.fandom.com/wiki/Arthur_Bleek?oldid=104103"
Community content is available under CC-BY-SA unless otherwise noted.