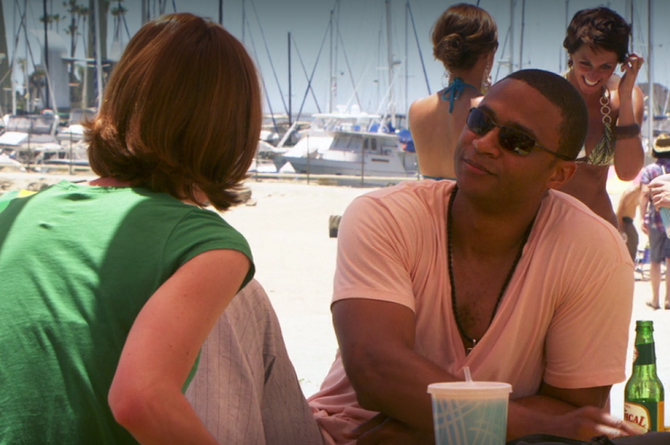 Anton Briggs is a character in the Showtime series DEXTER.

For a time, he is a confidential informant (CI) for Detective Joey Quinn (although, unknown to Briggs, it's not official). Later, he is Debra Morgan's boyfriend. At one point, Anton is kidnapped and tortured by The Skinner.

Briggs is an easy-going, occasional pot user, and musician. Nevertheless, he did punch Joey Quinn because he had lied to him.

Joey Quinn introduced Officer Debra Morgan to Anton in order for her to get help on her cases. The first time that she visited Anton, she asked for information on Fred Bowman (aka Freebo) after he "killed" Oscar Prado. Anton only recognized Freebo from the media spreading his picture around, but did reveal that Oscar was one of Freebo's customers and into him for a large amount of money.

When Debra was kicked off the case, she came to Anton for information on a murdered Jane Doe case she was working. He pointed her to a local pimp named Javier Garza who dealt with young prostitutes that paid for their drug habits with sex. After Javier ended up murdered, Anton took his safety more seriously, and refused to help Debra. At one point, he used pot right in front of Debra and she arrested him. After he was released, Anton wrote a song about Debra, insulting her.

One early morning, Anton stood on a street near his apartment as Deb pulled up in her car. He asked what was so important that he had to get up in the “ass crack of dawn.” Deb told him to get inside the car and then warned him about a rumor claiming that he knew the location of Freebo. Although Anton didn't know it, she advised him to leave town. Anton suddenly realized that he was being set up by the cops as bait for The Skinner.

Anton was captured at home by The Skinner and tortured for information on Freebo's whereabouts. He was eventually rescued by Detectives Debra Morgan and Joey Quinn, with Debra being strongly motivated by her feelings towards him. They soon became an item and were invited to Rita and Dexter's wedding.

Anton and Debra Morgan progressed with their relationship and moved in together. Debra speculated that they were able to hold it together because Anton was frequently away on cruise ships that booked his band.

The reintroduction of Frank Lundy into Debra's life caused her to quickly lose integrity in her relationship with Briggs, ultimately cheating on him with Lundy. Her guilt caused her to tell Anton, and he promptly left at her request. He was not seen since then.

Anton playing his guitar in a club

Anton smokes a joint, after Debra orders him not to, causing her to arrest him

Anton is tortured by The Skinner

Anton and Debra start a relationship