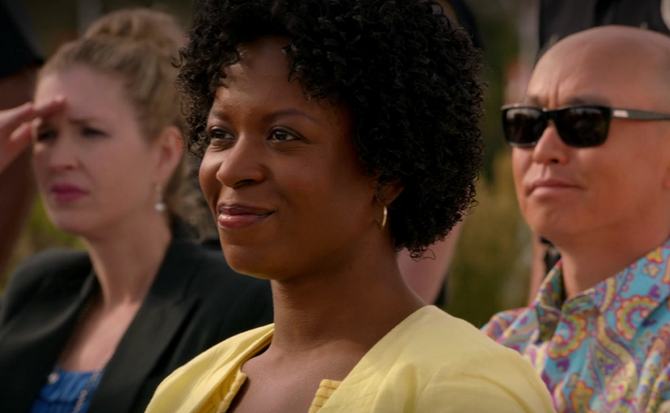 Sergeant Angie Miller is a character in Season Seven and Season Eight of the Showtime series DEXTER.

As a Detective (later promoted to Sergeant) within Miami Metro Homicide, she works alongside Detective Joey Quinn and Lieutenant Angel Batista in homicide Investigations.

Angie is a smart, hard-working, ambitious detective, with a sense of humor. She gets along well with her co-workers, although she is frequently annoyed by forensic tech Vince Masuka's behavior and pervy comments..

After Detective Mike Anderson is shot and killed, she joins the detectives investigating the shooting. She begins to fill the role as Anderson's replacement, but to a lesser degree. Angie remains in the background, speaking up only on occasion.

Angie's role broadens as she appears frequently at crime scenes, and talks with the main characters.

Following Angel Batista's promotion to Lieutenant after the death of Captain Maria LaGuerta and the resignation of Lieutenant Debra Morgan, his Sergeant position is left open. Two known candidates apply for the position -- Angie and Detective Joey Quinn. Both pass the Sergeant's exam, but Batista picks Miller due to her skills, intelligence, and trustworthiness. Also, Deputy-Chief Thomas Matthews pressures Batista to pick her, saying that it will be good "PR" to have an African-American woman in the position.

Following her promotion, Angie only reappears a few times, including at the Dead Cyclist crime scene and in Papa's Cafe after Evelyn Vogel's funeral.

Angie listens to Joey Quinn give a presentation

Angie lets Angel Batista know she is ready to be promoted
Community content is available under CC-BY-SA unless otherwise noted.
Advertisement