Angel of Mercy Hospital is a location in Season One of Showtime's series DEXTER.

It's an abandoned hospital in Miami.

Harry Morgan's father was employed as a janitor in this hospital, before "working his way up to Chief of Maintenance." Two weeks before it closes, Harry and Dexter have their photo taken together in front of the building. While there, Harry experiences brief heart pain.

The Ice Truck Killer holds Tony Tucci hostage in the abandoned hospital and performs live amputations on him. He leave the body parts on display in public places that are reminiscent of Dexter Morgan's childhood (such as Petrie Beach and the McCaffrey Pumpkin Patch).

Dexter finds Tucci in this building, cut up, and begging for a merciful death. Since he does not fit the Code of Harry, Dexter refuses to end his life. Dexter sends an anonymous tip to Debra to check out the hospital. When Tony is found alive, Captain Thomas Matthews praises her.

Upon arriving back at his apartment, Dexter burns the photo of of him in the hospital standing near Tucci that the Ice Truck Killer had left for him. As he watches it go up in flames, Dexter reflects:

"What about me? Maybe I'll never be the human Harry wanted me to be, but I couldn't kill Tony Tucci. That's not me either. My new friend thought I wouldn't be able to resist the kill he left for me...but I did. I'm not the monster he wants me to be, so I'm neither man nor beast. I'm something new entirely. My own set of rules. I'm Dexter."

The team returns to the hospital and finds a lozenge wrapper in a rat's nest. It turns out to have a partial fingerprint on it, belonging to the killer. 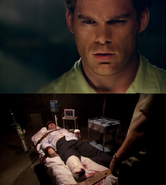 Dexter finds Tucci in the hospital

Kill tools left behind for Dexter to kill Tucci
Community content is available under CC-BY-SA unless otherwise noted.
Advertisement