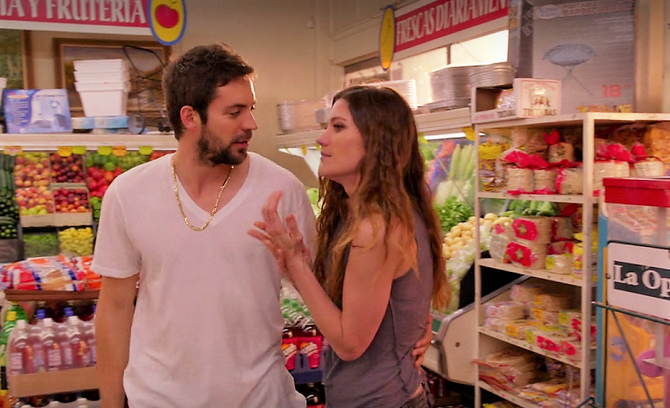 Andrew Briggs is a character in Season Eight of the Showtime series DEXTER.

He was an armed robber who skipped bail and tried to sell the jewels he had stolen.

Debra Morgan had quit her job at Miami Metro Homicide due to her guilt of murdering LaGuerta and was working at Elway Investigations as a private investigator. She picked the case involving Andrew Briggs, an armed robber who had skipped on his bail. She was supposed to bring Briggs into custody and attempt to find the jewelry he had stolen, which was worth $500,000.

Because Briggs had knocked out a security officer and ripped off a mob's store, he was the target of a hitman named El Sapo, who was being sent to pose as a "fence" that would buy the jewelry for a hefty price. Once El Sapo had the jewelry, he was going to kill Briggs.

While undercover, Debra flirted with Briggs at a bar, and he was immediately attracted to her. To get close to him, Debra began to stay with Briggs at the Pink Motel (Fort Lauderdale) where he was hiding out. Soon, Debra began to enjoy being with Briggs, and would snort coke and have frequent sex with him. He began to trust Debra and told her of his plan to fence the jewels.

Despite her feelings for Briggs, Debra knew that she had to follow through with her plan. She spied on Briggs and El Sapo from the motel window, while calling Joey Quinn to learn more about El Sapo.

Meanwhile, Dexter learned that El Sapo was a hitman, not a fence. He drove to the motel to warn her, but Debra insisted on staying with Briggs. When Briggs interceded on Debra's behalf, Dexter pushed him into the motel room and punched him. Briggs moved to grab a knife, but Dexter seized it first and killed Briggs with it, enraging Debra.

Briggs' arrest record
Add a photo to this gallery
Retrieved from "https://dexter.fandom.com/wiki/Andrew_Briggs?oldid=106179"
Community content is available under CC-BY-SA unless otherwise noted.