Start a Wiki
Alex Timmons is a character in Season One of the Showtime series DEXTER, as well as in Dexter Early Cuts.

He was one of Dexter Morgan's earlier kills, and the one that inspired Dexter to make trophies out of blood slides, with Alex being the first.

Alex was a muscular, African-American male with a mustache and a bit of a beard. He had short black hair and a tattoo from the Marines on his right arm. He wore a variety of different clothes, from hunting attire to tight-fitting muscle-T's and a cap.

He had a hardened personality, and would kill innocent, defenseless beings, feeling no remorse afterward. His motivation for killing four innocent people in the TV series was not revealed, but none were very young children. Thus, his personality was not exactly the same as his Early Cuts counterpart;

In the flashback of Alex's death in the TV series, he did not show the same level of fear that his Early Cuts counterpart did; as he did not beg for his life. In Early Cuts, he was cowardly at death, saying anything he could muster to convince Dexter to let him live. This didn't work with Dexter, however.

When the Ice Truck Killer retrieved Valerie Castillo, Dexter's last victim, from the sea, a police investigation was initiated. Dexter decided to eliminate any evidence that might implicate him. He threw all of his killing tools into the bay from his boat, and was about to do the same with his blood slides. Before doing this, he looked through his blood slides, reminiscing about his victims. Alex was the first victim that Dexter remembered. Like most of Dexter's victims, Alex had been wrapped in plastic. Before his death, Alex admitted to his crimes.

Although they are not shown or mentioned, Alex killed four innocent people after he returned to the states,

Timmons had been a hunter since he was young, and developed a fondness for killing. He later became a U.S. Marine Corps sniper, which allowed him to kill openly and mask it as war fighting.

While in Iraq during the Gulf War, his impulse to kill led him to shoot and kill three civilian children. He got off with a slap on the wrist, and a discharge from the Corps. It infuriated Timmons when he was sent home.

Dexter first approached him at a gun range where Timmons often practiced. He then pretended that his car wouldn't start and asked Timmons for assistance. While Timmons was distracted under the hood, Dexter sedated him, abducted him, and killed him in his home with a Marine Corps combat knife. Dexter then took his first blood slide trophy. 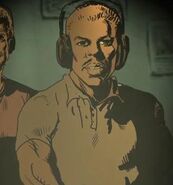 Timmons as he appears in Early Cuts

Retrieved from "https://dexter.fandom.com/wiki/Alex_Timmons?oldid=104892"
Community content is available under CC-BY-SA unless otherwise noted.