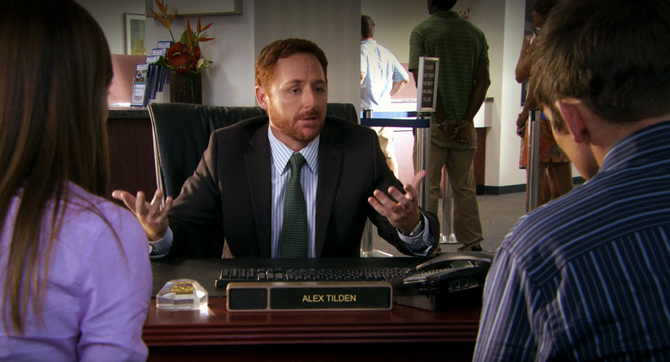 Stabbed in the chest by Lumen Pierce, under Dexter Morgan's supervision

As a member of the Barrel Girl Gang, he raped and tortured his victims.

Boyd Fowler killed the women via barrels of formaldehyde jumper cables, and then dumped the bodies in a marsh. Cole Harmon further transported them to an unknown location.

From adolescence, he raped and tortured women under the direction of Jordan Chase.

Alex Tilden is a character in Season Five of the Showtime series DEXTER.

He is a banker and also a member of the Barrel Girl Gang, being responsible for the torture and rape of fourteen women, along with the murder of twelve of those women.

Alex is a man with red hair and a short beard that attaches to his sideburns. His work attire consists of a suit and tie, with a dress shirt underneath.

When first introduced, Alex is being questioned at his workplace by Debra and Quinn about the men who are suspected of murdering the barrel girls. He admits to knowing Cole Harmon, but seems indifferent to his disappearance. However, in private, he shows a great deal of anxiety, which he shares with Jordan Chase. In the short phone call between Alex and Chase, Alex is easily manipulated by Chase, although he shows resentment and awareness of it.

As an adolescent, Alex met Eugene Greer through Cole Harmon, along with Dan Mendell and Boyd Fowler, at River Jordan Camp. Eventually, the five of them abducted and raped Emily Birch, under the commands of Eugene. Afterward, a photograph was taken by Emily to capture the event.

Alex went on to graduate high school and college, later becoming a banker. Through the years, Alex continued to join the group in kidnapping and raping more women. The details of Alex's role is not disclosed, although it is discovered that he keeps a piece of jewelry from each of his victims as a trophy.

Meanwhile, Eugene moved to Miami, and changed his name to Jordan Chase.

Lumen Pierce figures out Alex's identity as one of her rapists, thanks to Emily Birch. Detectives Debra Morgan and Joey Quinn interview him on why Cole Harmon contacted him. Alex provides the excuse that they are both involved in fantasy football. He also denies knowing Dan Mendell and Boyd Fowler, but admits recognizing the name Jordan Chase, although claiming to have never met him. After the police leave, Alex becomes visibly nervous.

Later, DNA evidence proves that Alex participated in the rapes like the other men, except for Chase.

When Dexter and Lumen Pierce search Alex's house, they find his trophy case with thirteen pieces of jewelry in it. Lumen recognizes a four leaf clover necklace that her grandparents gave her when she graduated from high school. She had worn it on the night they captured her. Lumen decides to take it back, and Dexter fastens it around her neck.

Becoming worried, Alex has a conversation with Jordan about what he should do, fearing that he'll be next to be picked off by the vigilantes. Jordan tells him to calm down and that he has a plan, and that all Alex has to do is continue his normal routine. Alex reluctantly agrees but, as soon as he arrives home, he finds the video playing of Lumen being raped, and she suddenly appears in front of him. He panics and tries to fetch his gun, but is stopped and injected with M99 by Dexter.

Dexter and Lumen take an unconscious Alex to the vacant house next door. Dexter straps him to a table with plastic and begins his kill ritual proceedings. The photos on the wall reveal Alex to be linked to twelve murders. Dexter then allows Lumen to confront him. After Alex begs for his life, Lumen kills him with a single knife strike to the heart. Lumen keeps Alex's blood slide. During the kill, they are unaware that Debra and Quinn are searching Alex's house, only to find him missing.

Alex being questioned by police