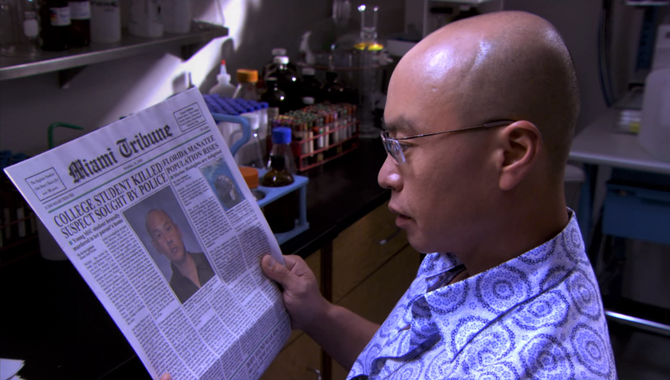 He broke into people's homes by jimmying the backdoor locks with a screwdriver. Then he stole from them while wearing socks. If interrupted, he acted violently.

Chung would break into houses and steal their valuables. If caught by the owners, he killed them.

Albert Chung is a character in Season Three of the Showtime series DEXTER.

He was only a petty burglar until he nearly killed a woman, after which he was represented by defense attorney, Ellen Wolf. When Chung received no jail time, he murdered a college student.

Chung first broke into an elderly woman's house while wearing only socks on his feet. When the woman interrupted his burglary, he pushed her down the stairs. Chung escaped prosecution with the help of defense attorney Ellen Wolf after the victim couldn't identify him in a line-up.

Six months later, Chung broke into the Morton house. While there, Chung was discovered by a young college student named Lisa Morton. Chung tackled her, killed her, and fled. Since the pattern of bloody socks were found at the scene, Vince Masuka believed that Chung had killed Lisa.

Ellen Wolf tried to get Chung's charges lessened, as well as giving him several other benefits, in exchange for his surrender. This ended in a serious argument with Miguel Prado at the police station. Later, Wolf later helped LaGuerta arrest Chung.

Chung looked like Masuka, according to his picture. When Dexter pointed this out, it surprised Masuka but he acknowledged that it was true.