He was born in Hamilton, Ontario, Canada and grew up in the nearby towns of Dundas and Burlington, where he attended Burlington High School. He earned a Masters of Science degree in Marine Biology before becoming an actor. He currently resides in Los Angeles. 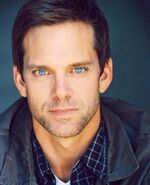